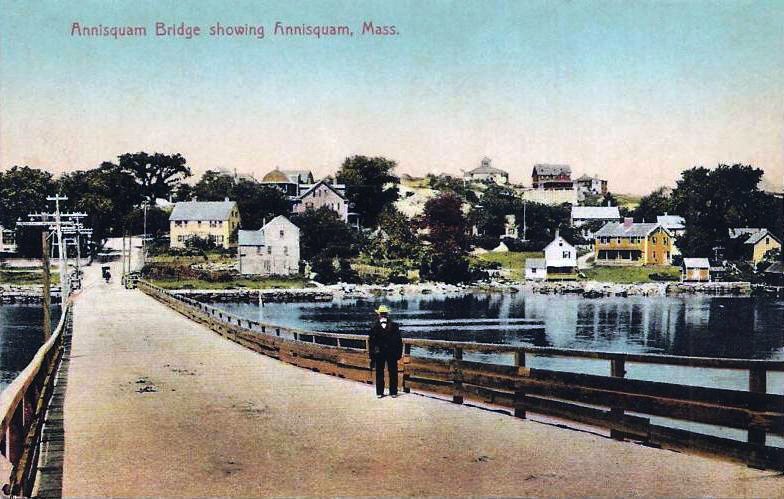 From Gloucester to Rockport, Route 127, you pass Annisquam without knowing it’s there.

It’s a cul-de-sac with two entrances. It’s first viewed from a causeway separating tidewater from a still inlet. From a distance, the Annisquam Yacht Club is visible and boats moored in Lobster Cove. Across from the club is Wingaersheek Beach. The Annisquam River between them runs on under the Lars Andersen Bridge, which connects to Route 128, and eventually leads to the Cut Bridge and Gloucester Harbor.

Cape Ann is an island. Circumnavigating it by land or sea entails a number of small communities, like Annisquam, each with unique character, ambiance and feng shui.

There is a rich literature from Rudyard Kipling’s Captains Courageous to Charles Olson’s epic The Maximus Poems.

During the 1950s, when I was a teenager, Gloucester was seeing the end of a legacy as a fishing port. That started during colonial times when boats and later schooners fished the Grand Banks. Cod was dried at Stage Fort Park and sold to European markets. The Italians and Portuguese lived in Gloucester. The city is no longer affordable for working class families. The waterfront has been bought up by developers.

Rockport, one of the quaintest towns in America had its lobstermen. One can still see them unloading the catch next to Motif No.1 in the small sheltered harbor.

Upscale summer folks had homes in Bass Rock while Brahmins resided in shingle style cottages in the gated community of Eastern Point. The family of T.S. Eliot summered there.  On a more modest, casual scale that describes the old families of Annisquam.

During the 1950s entrances to the village was bookmarked by Shea’s Market and the Village Church. Their daughter Nancy was my sister Josephine’s best friend. One shopped for basic groceries.

Past Shea’s there was a sharp turn onto the wooden bridge over Lobster Cove. Today, it’s a footbridge. The only way in is a sharp hook past the Village Church onto Leonard Street which leads into a road past the harbor, Annisquam Market, and on to the Yacht Club. Past that to the left Cambridge Avenue passes the riverfront Bent Estate, the quaint, exclusive Byrnmere Inn ending at private Cambridge Beach.

Looping round one passes under Squam Rock, the highest elevation on Cape Ann and the trust held by local residents. It was sold to the people of Annisquam by the French Family in the 1950s to prevent development. With that comes public access to its stretch of Lighthouse Beach. That is if one can find parking and are willing to make the long trek from road to beach.

When we were kids it was also where we went blueberry picking. I knew where all the best patches were. Lilian made wonderful pies for us.

Our House in Norwood Heights 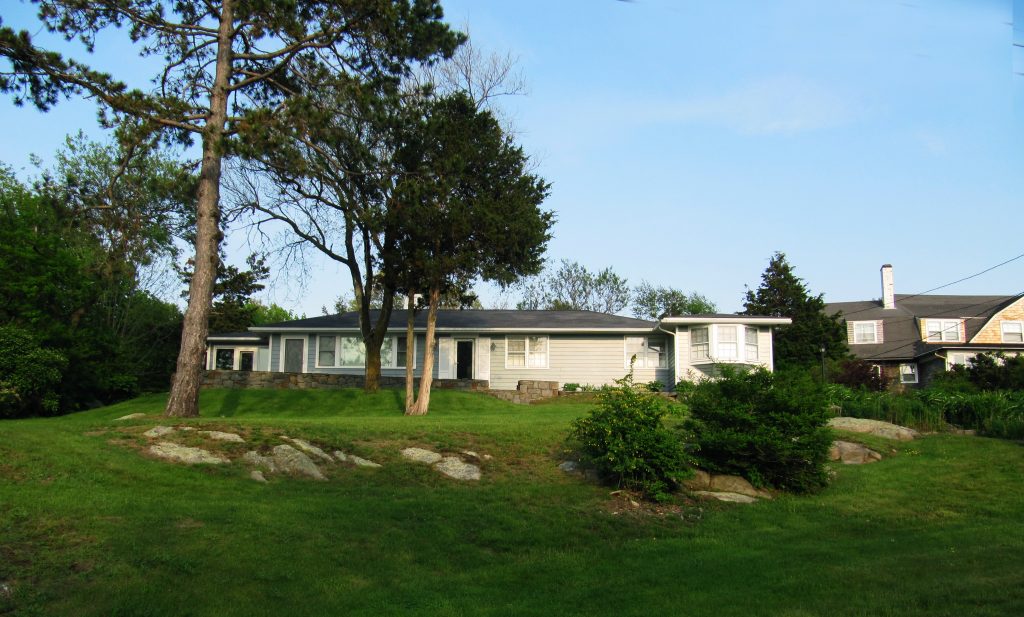 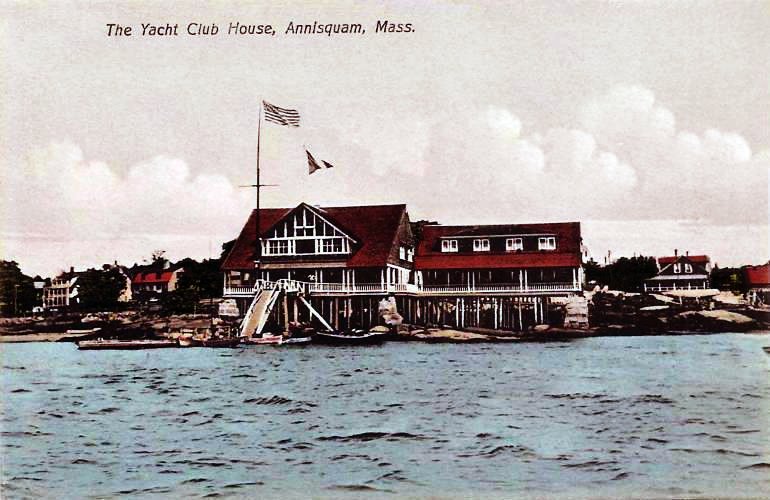 Our neighbor Clarkie Ross shared all the village gossip 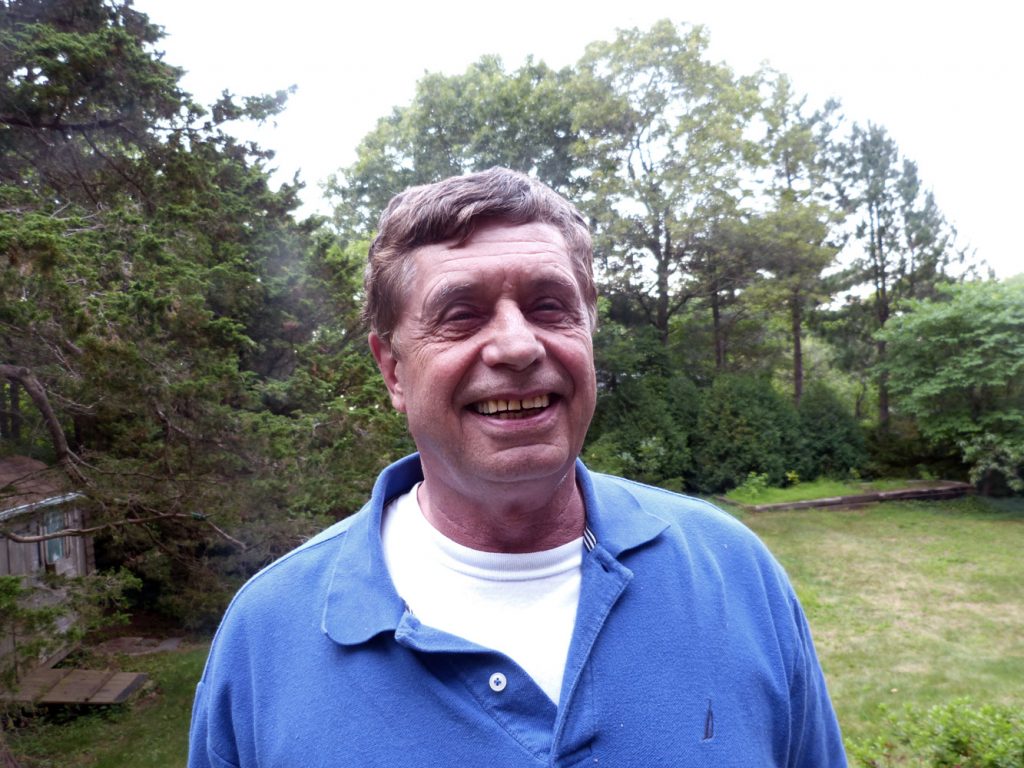 Vintage view of the road next to Lobster Cove 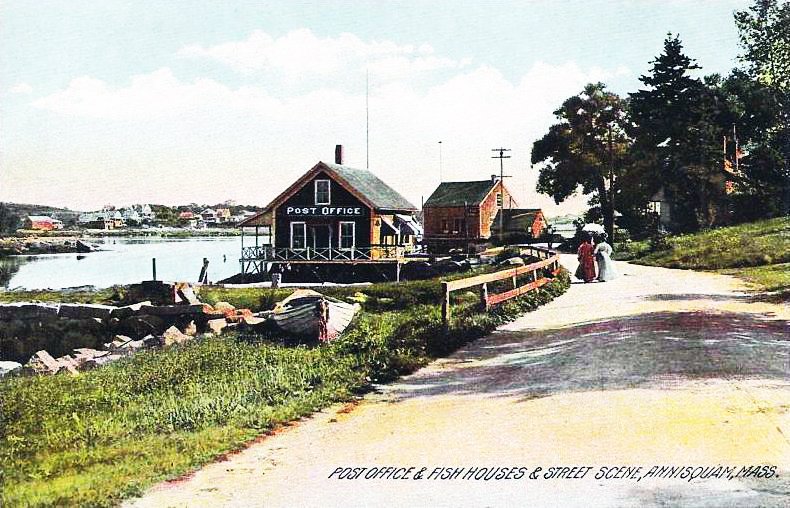 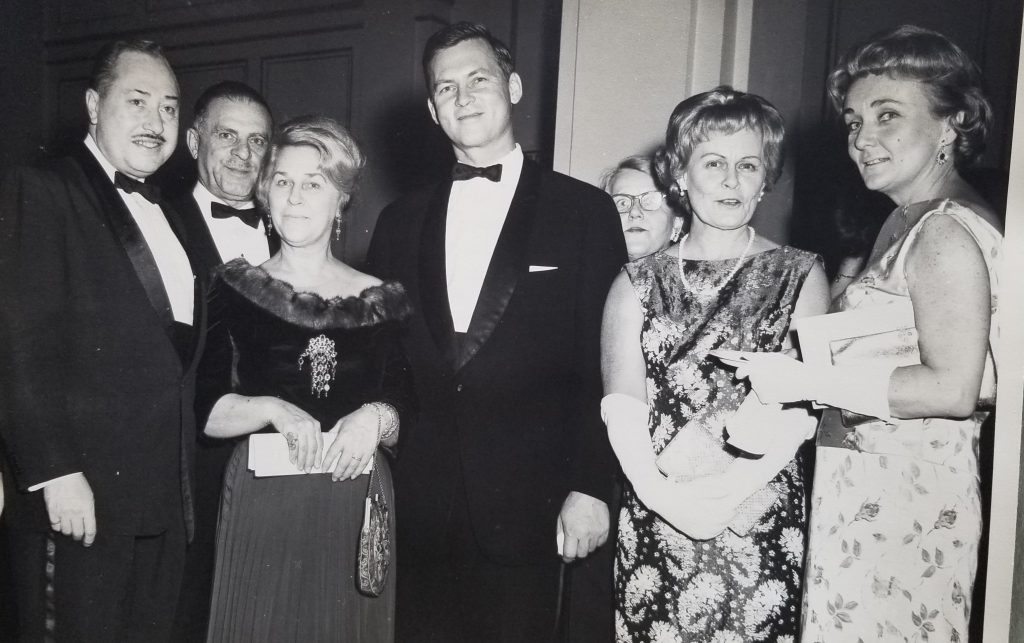 The family Norwood Heights in 1949 with infant Pip 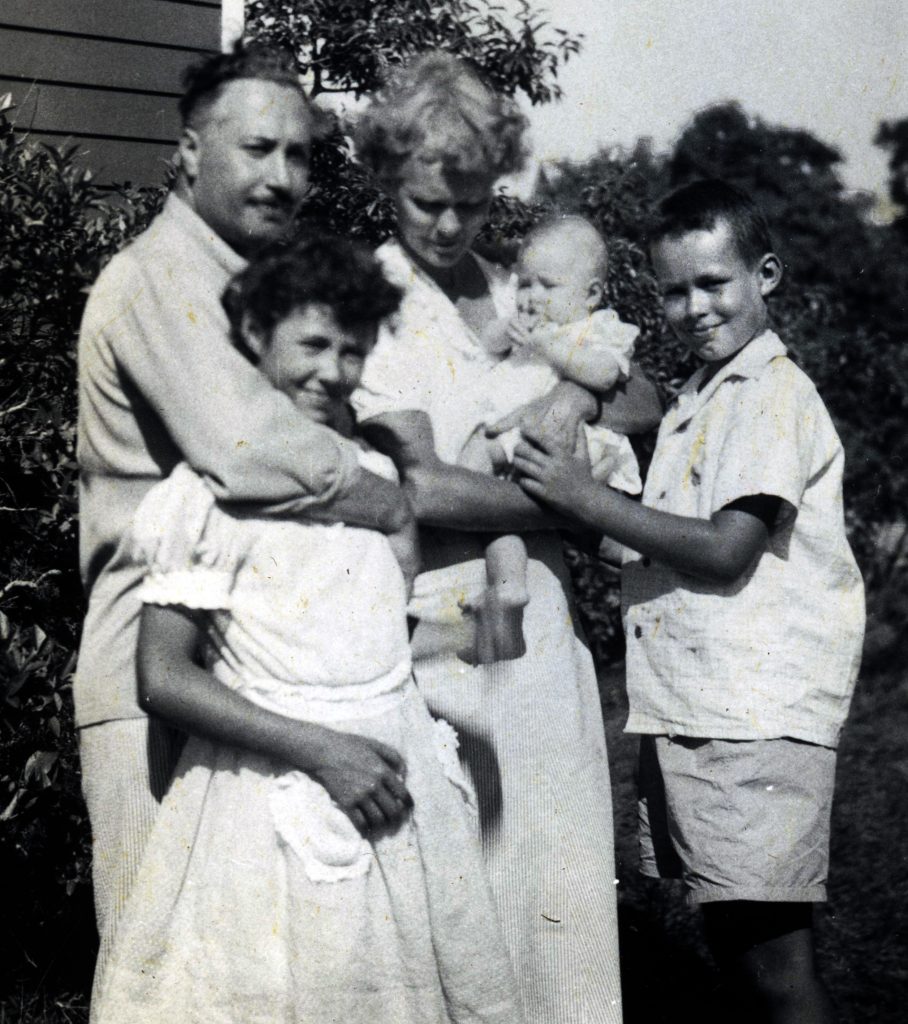 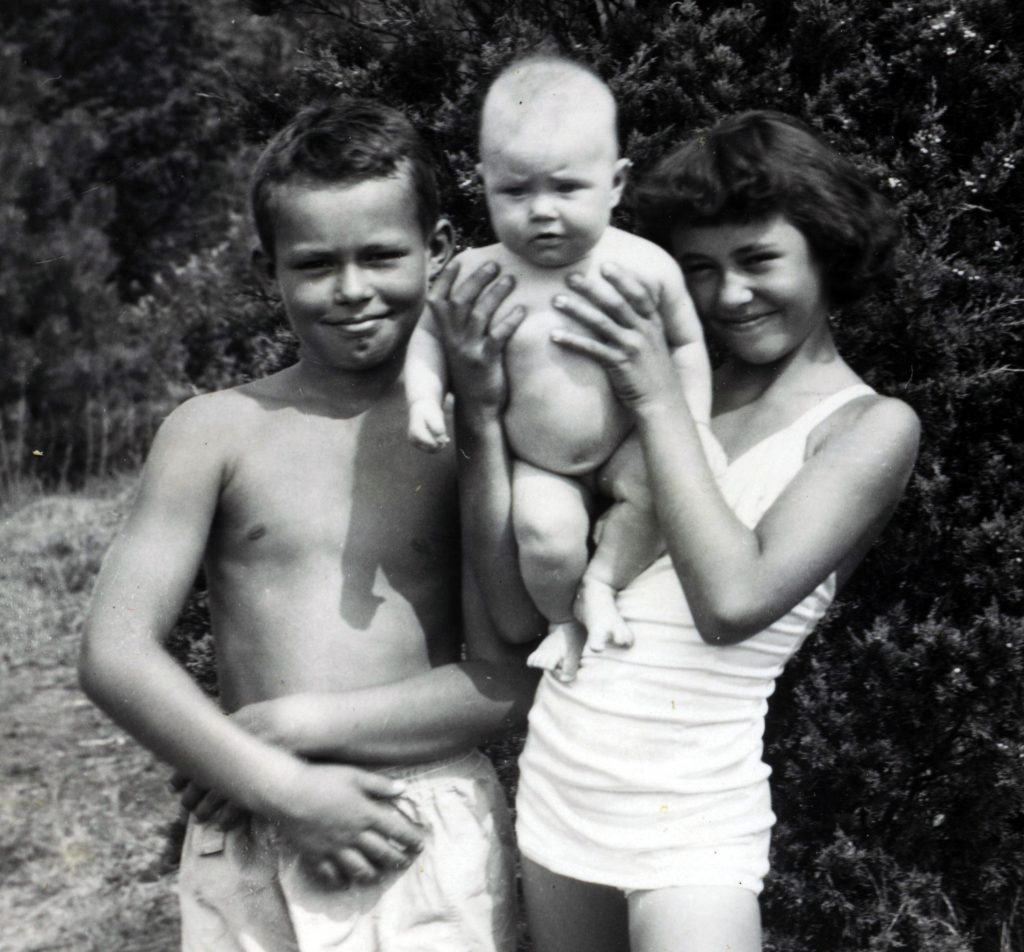 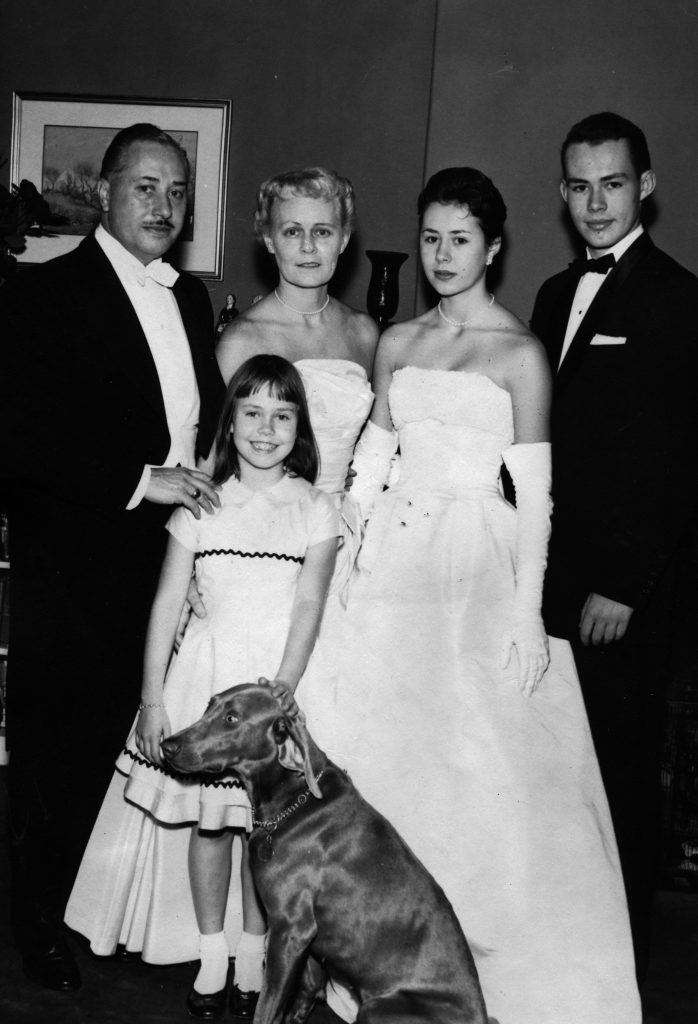 Doubling back to Leonard Street, having made a loop of the village, there is the entrance to Norwood Heights where Mom bought a plot of land looking out at the ocean. The house was sold when she passed. My sister Pip still lives in Norwood Heights. Next to her is Debbie Ross and across the street was the home of Gloucester High School football coach and mayor, Nate Ross. He and Helen had three sons of which the youngest, Clarkie, was a mascot and village gossip. When we first arrived in Spring, Clarkie would show up in a matter of minutes with all the latest news.

The eldest son, Skip, dated his neighbor Debbie the summer he graduated from Amherst. That fall he went to Paris to pursue the literary life. He was soon out of cash and down on his luck. That changed when he became the driver and aide to a Monsignor. Writing longing letters to Debbie she came and they married. That all seemed so desperately romantic to me as I knew them well.

The pride of Norwood Heights is the walk down to private Light House Beach. Our life was ruled by tides and the right time to swim in the bitter cold Atlantic water. Dad painted countless versions of the Lighthouse. While Mom mostly sat on the sand and gossiped with old biddy friends. A physician and working mom she deserved the leisure.

Her beach pals were Peg Usher and the redoubtable Nancy Deshler. Our friend Drew, who passed recently, cared for them. Everyone depended on and loved Drew.

Born in Gloucester, for Mom, the move to Annisquam was more than a change of residence. It was a far cry from summers on the family homestead in Rockport, Beaver Dam Farm, where her widowed grandmother, Mary Nugent, raised 13 sired by Patrick. They were vilified as peasant Irish Catholics back then, as related in my book, The Gloucester Poems: Nugents of Rockport. Growing up Mom summered at Wheeler’s Point which was across the river from Annisquam.

The name “Annisquam” comes from an Algonquian term meaning ” top of the rock, containing <wanashque>, “on top of”, and <-ompsk>, “rock.” The first European settlement in Annisquam was established in 1631. In the late 19th-century, it was home to both granite quarrying and an artist colony. The last member of which was Margaret Fitzhugh Brown, whose studio lay between the market and yacht club.

The builders were still working on our ranch style home during our first summer in 1949. It was a misfit with ubiquitous, drafty, shingle style cottages of our neighbors. That, and Dad’s Cadillac convertible, identified us as interlopers in an understated, old money community.

Governor Peabody lived opposite to us one summer and Cambridge Mayor Ed Crane and his brood next to that. Kevin Crane was, for many years, my attorney.

Actor Cornel Wilde rented a house in Norwood Heights. He stayed in Hollywood, but his daughter Wendy, a dishy teen, came to the beach each day. The dancer Vera Zorina, ex wife of George Balanchine, was a summer renter. Scandalously, she wore a bikini and sunbathed topless on more private, small Lighthouse beach.

Mostly my early years in Annisquam comprised cheap thrills. My sister Josephine spent the summer in her room with her dog and romance magazines.

My sister Pip was an infant that summer and nine was a sensitive age for me. On the beach things did not go well and feeling isolated I made few friends. How I missed our pals the Beasleys at scruffy and unpretentious Red Gates not that far away in Lanesville.

Later I met the Harrisons who were hard drinking, fun loving and a total hoot to hang with.

When I was grounded Dad called the Harrisons and told them I had a 9PM curfew. How we all howled when late at night, in the middle of the party, Mrs. Harrison with dramatic emphasis said, “Charles, it’s past your curfew.”

On Sunday we attended the Village Church in Lanesville. Ben Smith and his family took up an entire pew. En masse they took communion. Ben, heir of a Gloucester box company, was Jack Kennedy’s roommate at Harvard. When Jack became President he appointed Ben to complete his term in the Senate. That sure pissed Governor Foster Furcolo. Ben was also Mayor of Gloucester. He came calling and offered to sponsor us for membership in the yacht club. That changed everything and we soon learned that for social status in Annisquam one either sailed or played tennis.