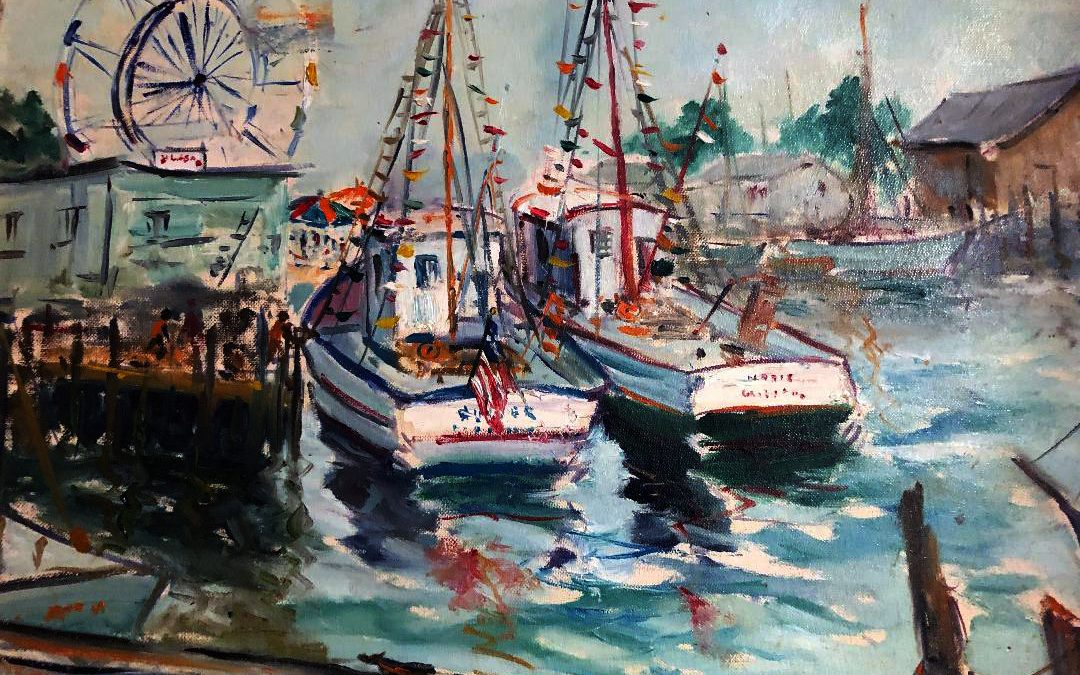 The Cape Ann where I summered as a teenager in the 1950s has developed and changed. Not necessarily for the better.

Arguably, that accelerated when the extension of Route 128 was completed connecting to a traffic circle just past the bridge spanning the Annisquam River. Turn right and head to Gloucester. Left was the road to Annisquam and straight ahead to Rocky Neck veering left to the road past Nugent Strip, the Beaver Dam Farm homestead of my Irish ancestors, and on to Rockport.

For years there was the long commute along the shore road that wound through Essex. On  Sunday nights returning to our home in Brookline could be brutal. The crawl, however, meant dining on the best fried clams in North America. There was rustic Woodman’s but Mom preferred Ship Ahoy a nice restaurant at the end of the strip.

Finishing 128 cut an hour to an hour and a half off of the commute. It made Cape Ann viable as a bedroom community to Boston. That added to the option of taking the train to North Station which stopped in Gloucester as well as Rockport.

All along the route there have been dramatic changes. Boston is ever denser with commensurate development and spiking real estate. Compared to which, Cape Ann is relatively affordable but ever less so.

During the summer season there are traffic jams in Gloucester. That was unheard of back in the day when it was a dying port. The annual Blessing of the Fleet, once a major event, is now a shadow of what it was.

There has been a downward spiral since swift Gloucester schooners plied the Grand Banks. Vividly I recall the fishing fleet coming into the Annisquam River from Ipswich Bay. There was the sound of squawking gulls screaming for scraps of fish. Lumpers unloaded the catch then headed to rough waterfront bars where no tourists ventured.

In Gloucester and round the Cape resided fishermen and lobstermen. Annisquam, Lanesville, and Rockport housed their modest cottages.

The economy was so much oriented to the sea that the center of the Cape, Dogtown, was abandoned by early settlers and remains so to this day. Developers and politicians eye its vast potential.

Our family homestead, Beaver Dam Farm, was on the edge of Dogtown where cattle were pastured. My Great Aunt Caddy, as a teenager, had a business picking blueberries and making pies. Locals knew all the best spots to harvest.

In Annisquam there is the twelve acre Squam Rock Trust. Share holders pay annual assessments to maintain the open space. It is overgrown with invasive species.

The blueberry patches of my youth are all but gone. There is a five year plan to reverse this trend by pulling out invasives and replanting indigenous species. Instead of manicuring, piles of pulled shrubs will be left as potential habitats for wildlife.

There is debate about preserving it as a natural space and not turning it into a park with benches and picnic tables. For such gatherings it’s advised to find a suitable rock to sit on or spread a blanket.

Cape Ann had the charm of a hard working community of fisherman with pristine natural settings from shore to center. There is a raw, exotic wildness that must be maintained.

I grew up rich and privileged near a fishing community that was not. Taking the bus downtown to Gloucester its ethnicity was palpable. That meant shopping at Virgilio’s for fresh, crisp Italian bread and pastry.

Catching the bus I went on dates to the movies usually at the North Shore. The Strand was rather grubby which is where I saw the 3-D House of Wax with Vincent Price. I bought my first rock 45 Rock Around the Clock by Bill Haley and the Comets in a popup store on lower Washington Street. Come August Brown’s Department Store had back to school displays in its windows.

When Pat Boone was big I scoured downtown for a pair of white bucks. I just had to have them for the Yacht Club dance.

Before the super markets, first Stop and Shop, then Shaw’s, the Cape was ringed by Mom and Pop grocery stores and diners. I loved having breakfast at Willow Rest on the edge of Annisquam. That was the last stop for gas before 128. You got to hang with the locals and hear the latest gossip. As was true for the Annisquam Market before it got all gussied up.

Gloucester still has lobster shacks and hangous like Charlie’s, which is kindah out of the way near Stop and Shop, or The Causeway. They still exist but now the lines are ridiculous. I try to pick off peak times for my fix of fish chowder or fried cod cheeks. Now you have to take out a mortgage for a lobster salad sandwich.

The Causeway is noisy but in my DNA. No visit to Gloucester is complete without a visit. But Astrid prefers Charlie’s which has less cacophony.

The fried clam plate at Woodman’s in Essex is now $33.99 which is the same as The Causeway in Gloucester. The same plate is $37.00 at the tourist trap, Gloucester House. My favorite Gloucester restaurant is Azorean near the train station. The Portuguese cataplanas (hot pots) are divine from $20 to $28 with nightly specials. Nearby is George’s (178 Washington Street) which is the destination for a huge, cheap breakfast.

When I was a kid there was Consolidated Lobster Company on a wharf between Annisquam and Lanesville. Opposite was a nice restaurant and lively bar scene.

Consolidated processed lobster meat. You could buy culls or a big bag of knuckles dirt cheap. It was a lot of sweat equity to pick out a fresh lobster salad.

One could still enjoy village life in Annisquam when I was a teenager. The lobstermen still plied their trade from boats moored in the eponymous Lobster Cove. The artist Margaret Fitzhugh Browne painted them. You would see them out and about gassing up at the market’s dock. One who befriended me took me out for a day as he hauled his traps.

It was a great adventure that ended at dusk. He sent me home with a lobster for dinner and a lifetime of memories.

Set back from the main road as a cul de sac, Annisquam was then remarkably self-contained. There was the busy market for sundries and cafeteria dining. Just beyond, was Ms. Browne’s studio and next to it a boat slip.

In the heart of the Village was the old post office. Getting a letter stamped was like being in a Norman Rockwell painting. To its side stairs led to the Village Hall. There were plays and events each summer. My niece, Sarah, played a Tree in one production and the recorder sometime later in “Oklahoma.” Everyone came though the heat was stifling on a summer night.

Also part of the complex of buildings was a small library, fire house, and the Village Exchange. On the upper floor was an art gallery. The fire house now is home to the Annisquam Historical Society.

My sister Pip donates my books to the library. Several years ago she organized a reading for Gloucester Poems: Nugents of Rockport. It was well attended and got a write up in the Gloucester Daily Times. Many family members came and swapped tales.

The highlight of the social season is the annual Sea Fair in early August. My Dad made a wonderful painting of it.

There were lots of games and booths. I tried to get there early in the morning for the book sale and flea market. That summer I read Ivanhoe and British history. It was fun to come home with a stash of cheap treasures.

The pride and joy of the Sea Fair was the Wax Works. We were guided through by Mr. Brooks as the barker. He would turn on a single light and espouse about the inventive displays. I vividly recall Abraham Lincoln and his entourage when he was assassinated by John Wilkes Booth.

As a young adult I was invited to portray Saddam Hussein but respectfully declined. In my Nudies of Hollywood suit of lights I would have made a decent Elvis. But such was not to be.