Turbulent times everywhere in America, and Boston was no different.  Antiwar demonstrations, rock music concerts, the proliferation of drugs, and Giuliano was there to both participate and to chronicle.  He uses photographs and taped interviews to tell some of that story in this well-received book. 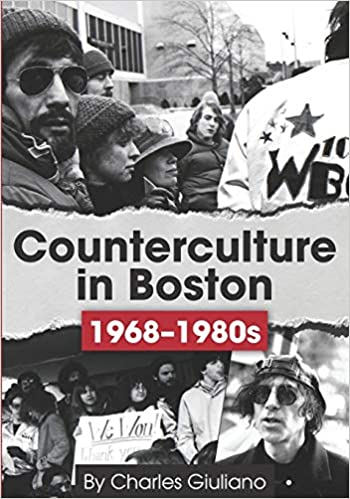 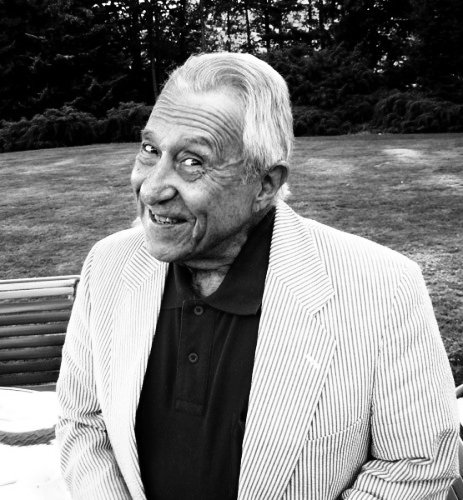 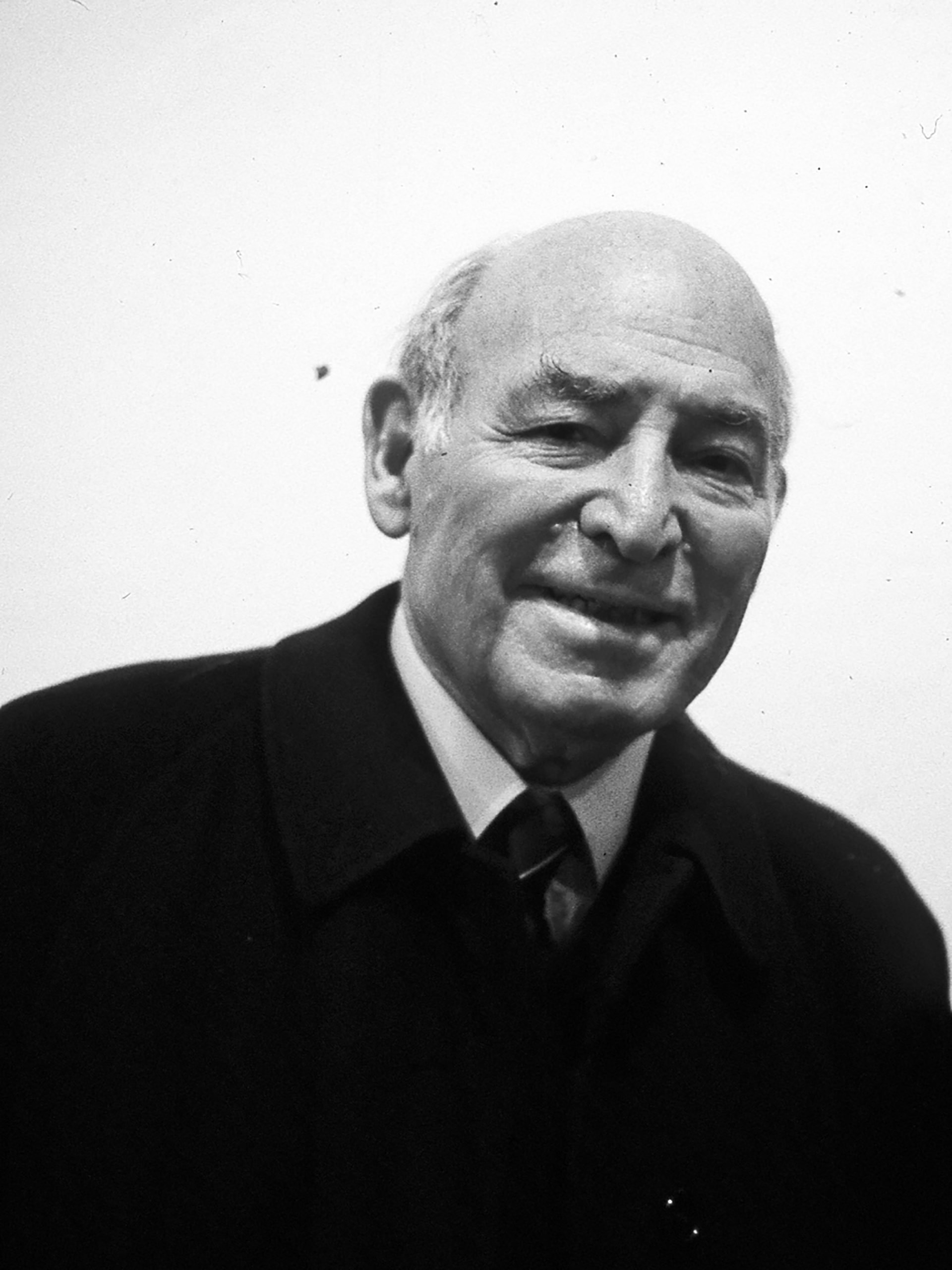 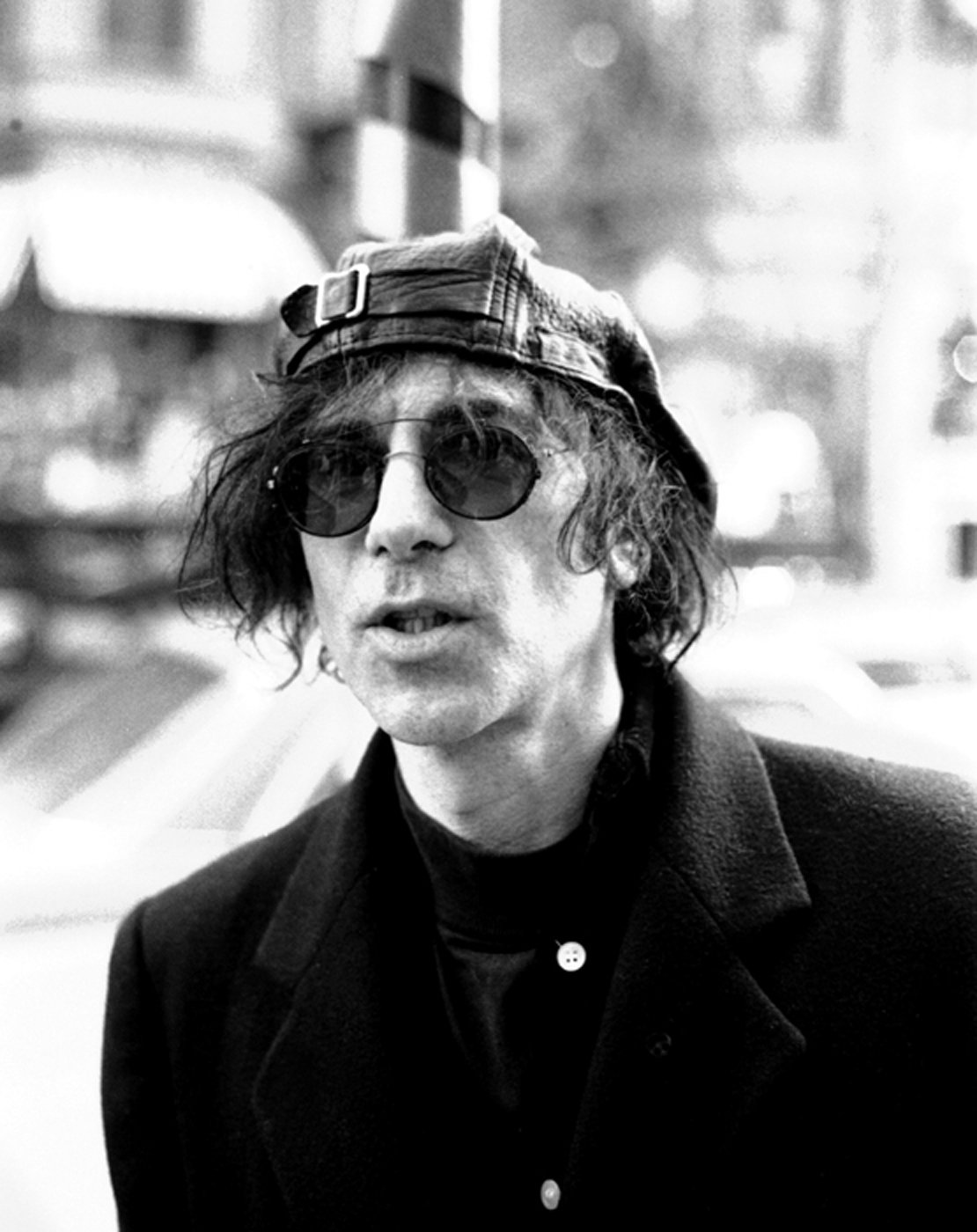 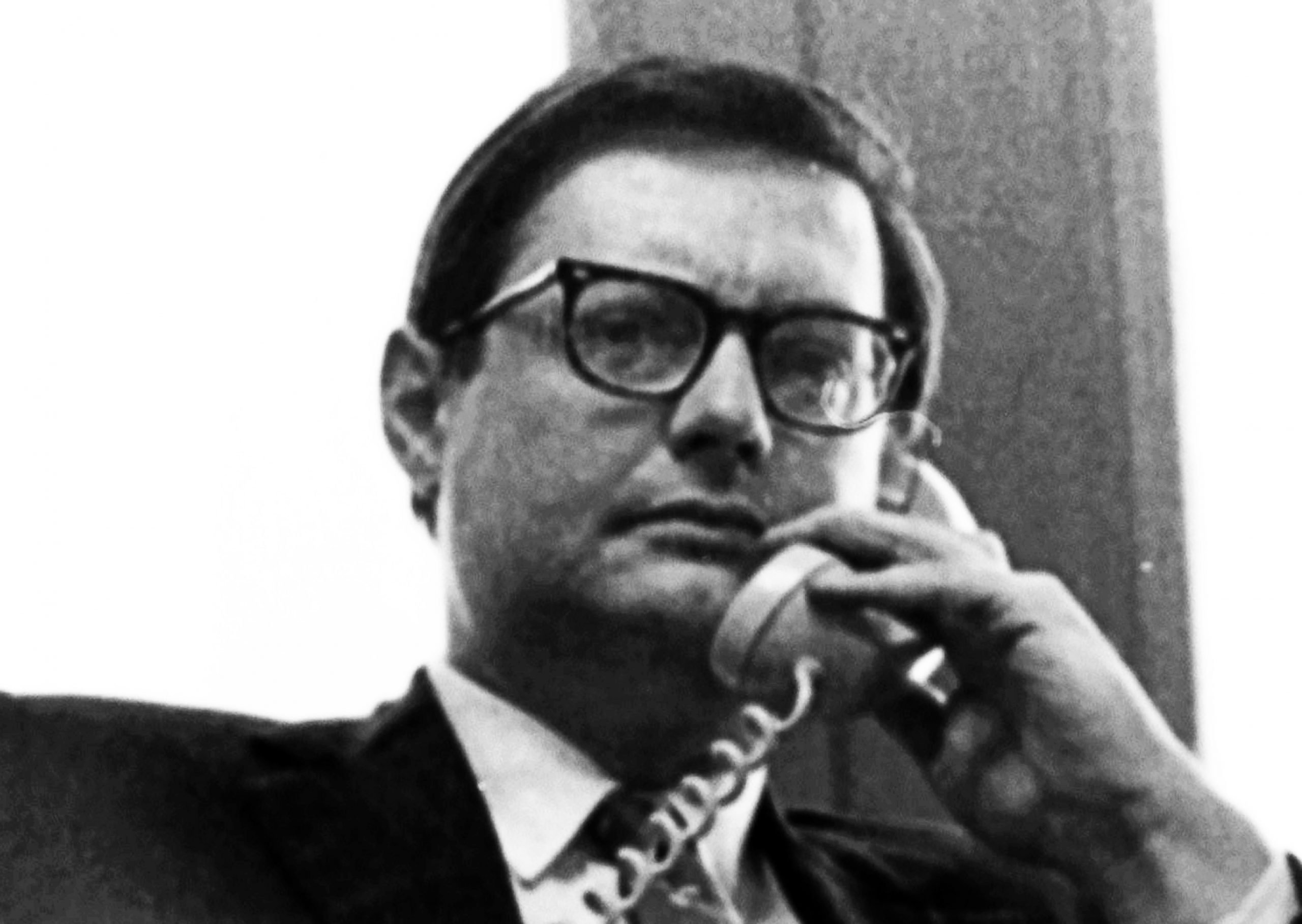 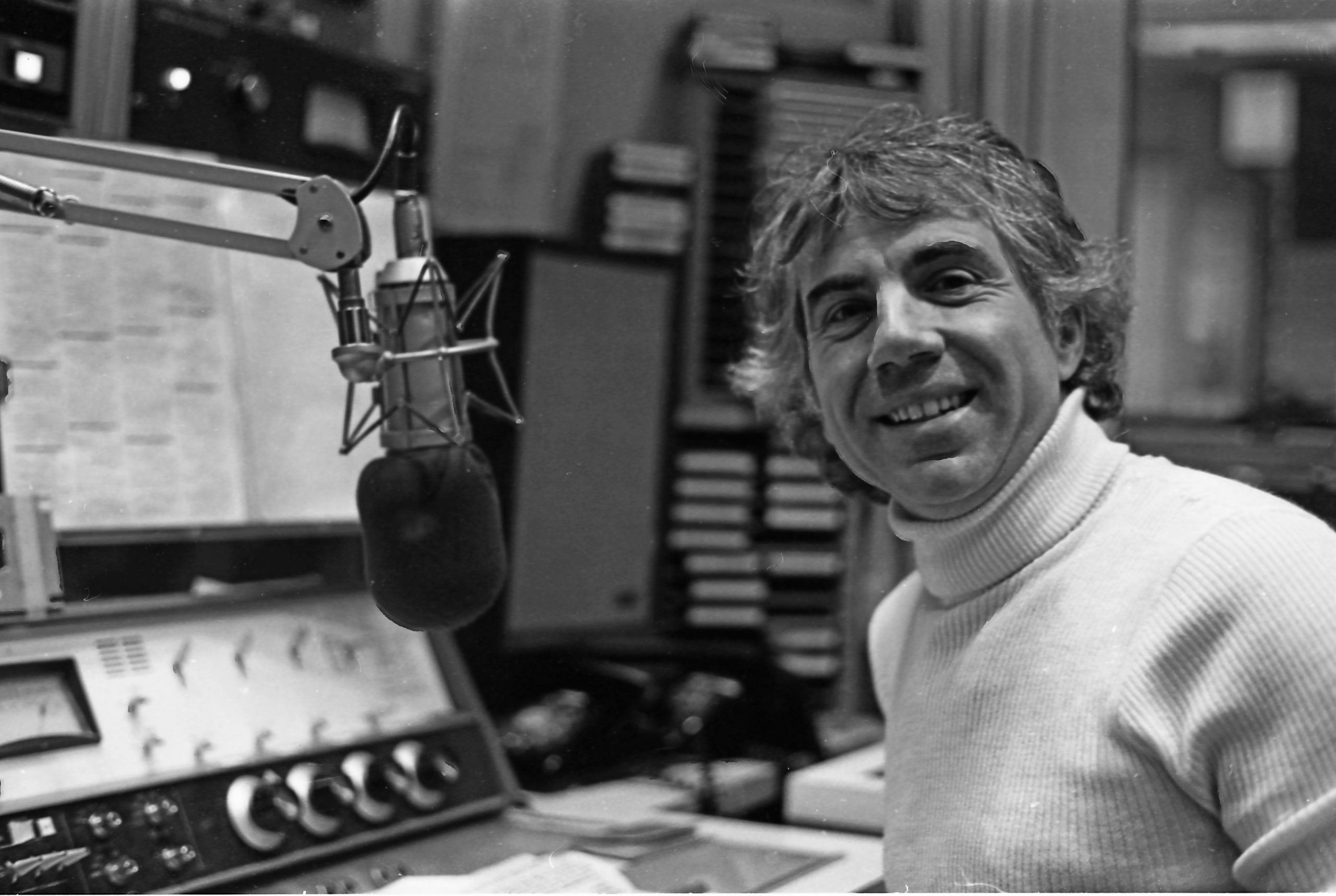 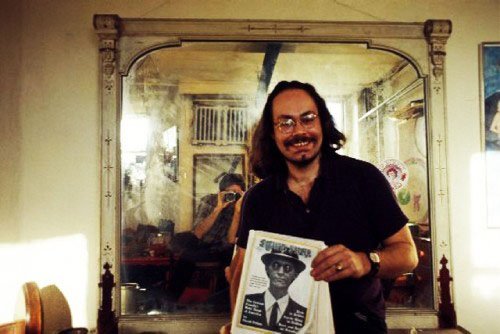 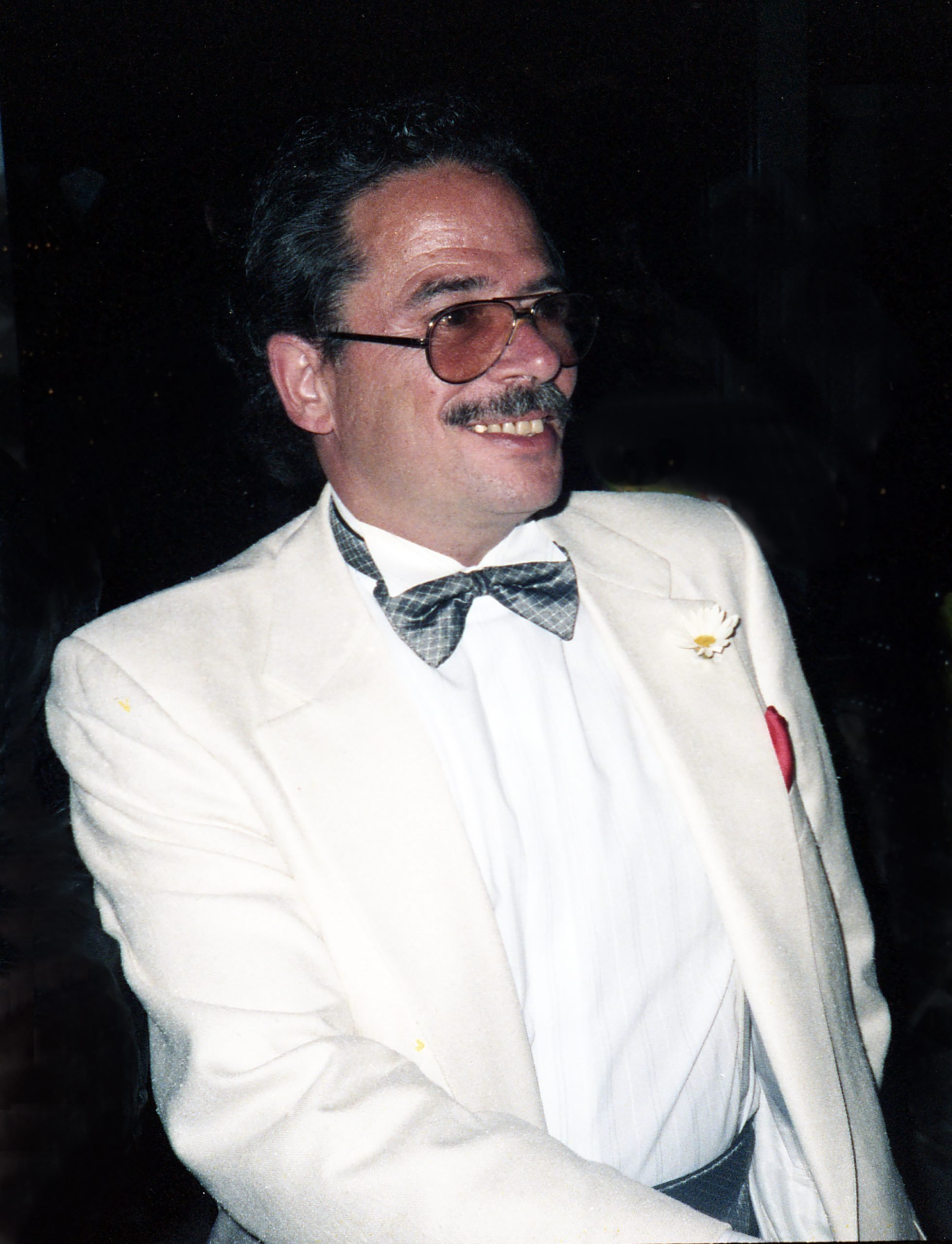 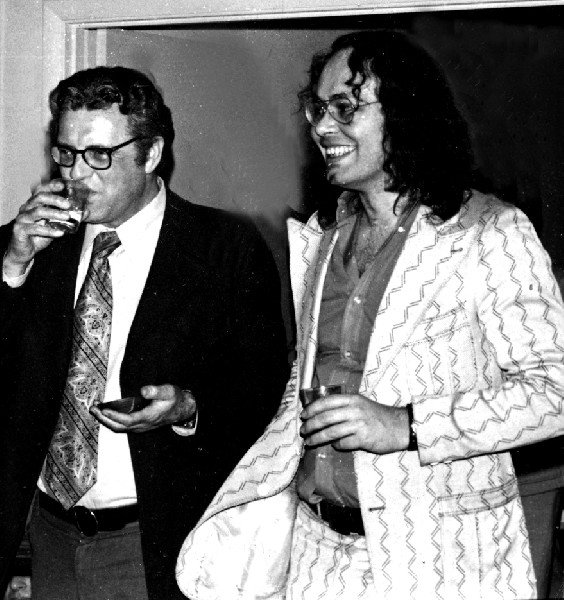 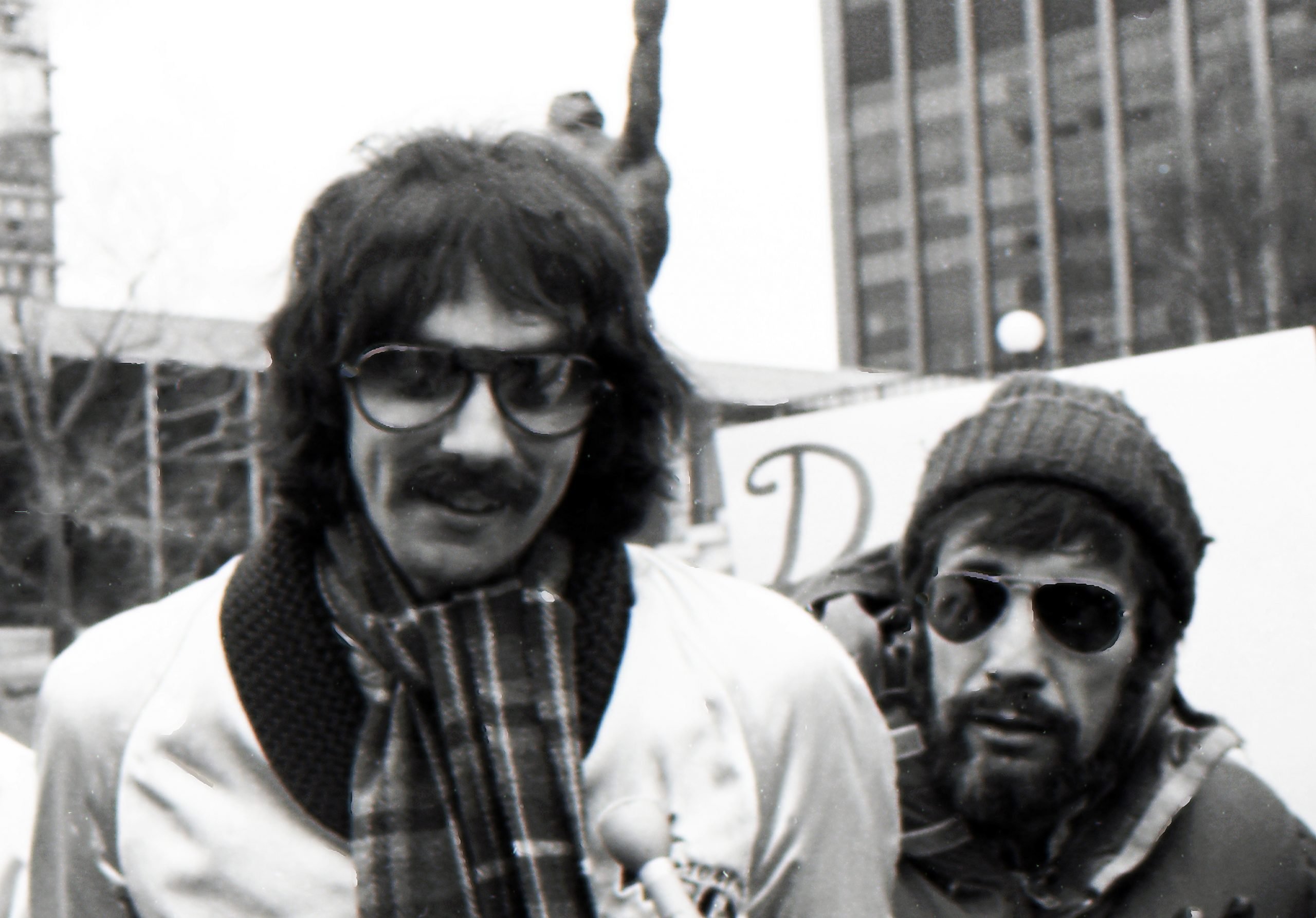 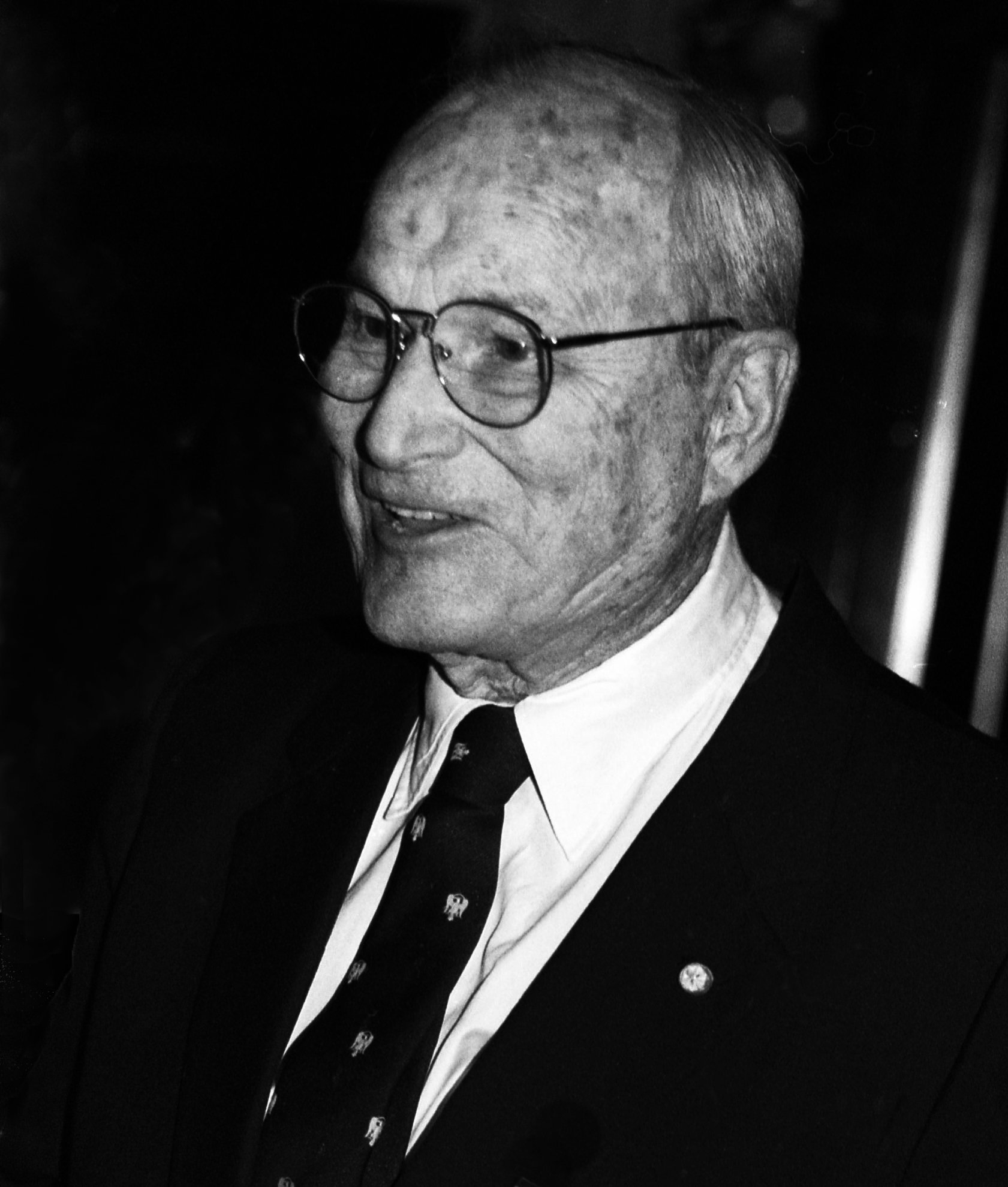 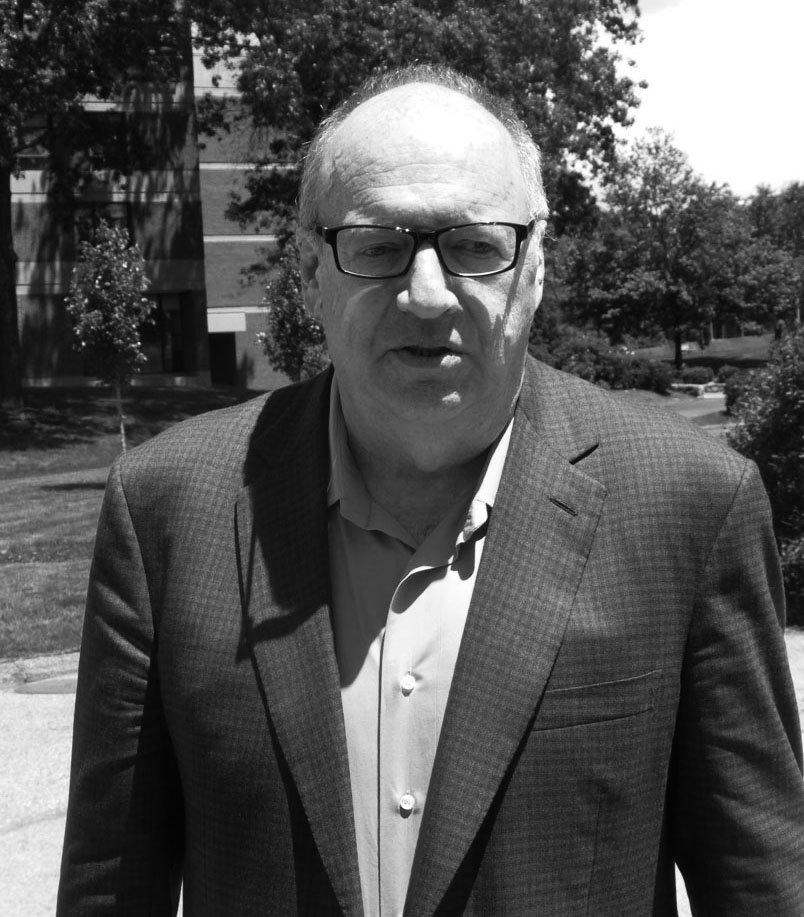 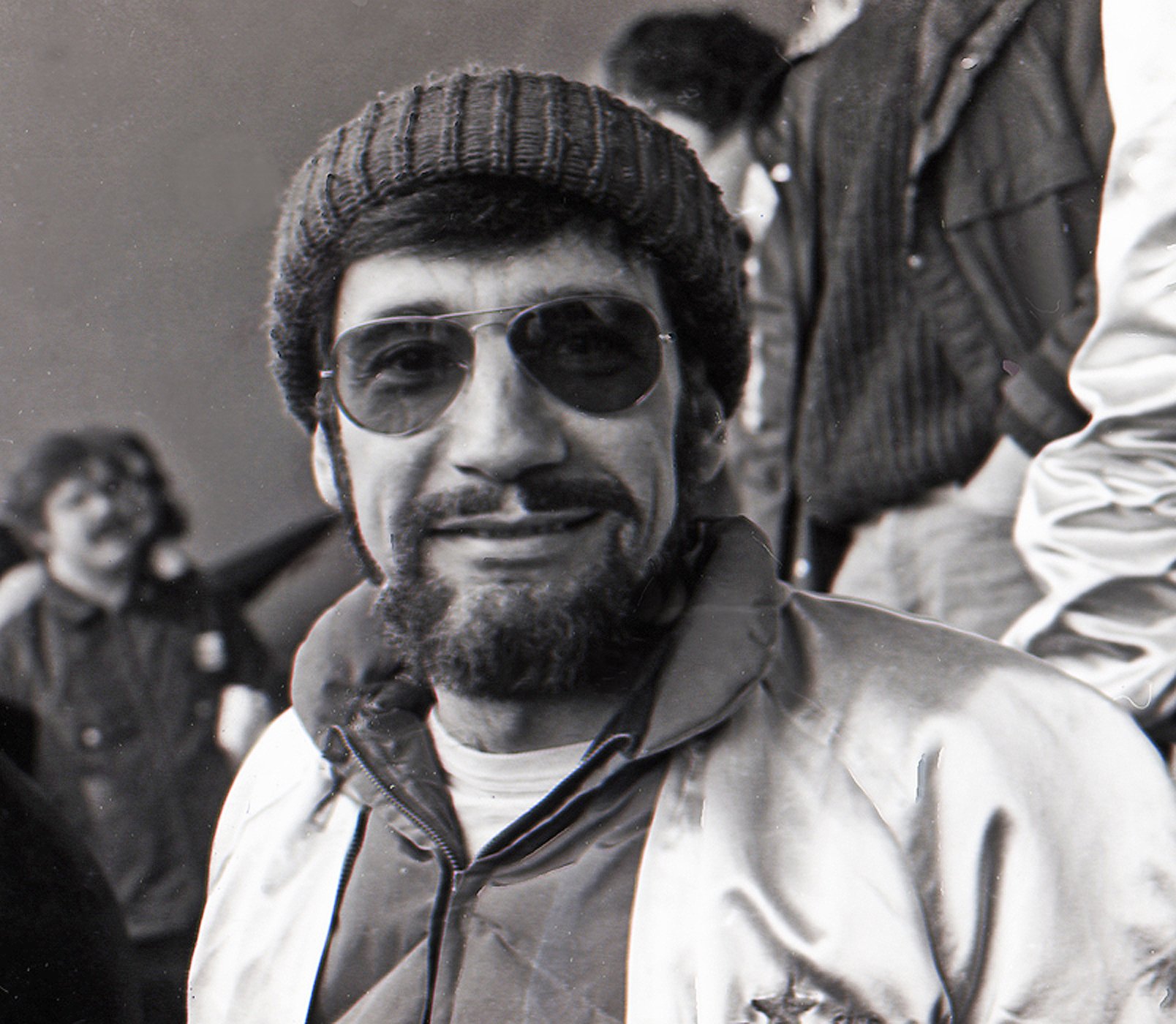 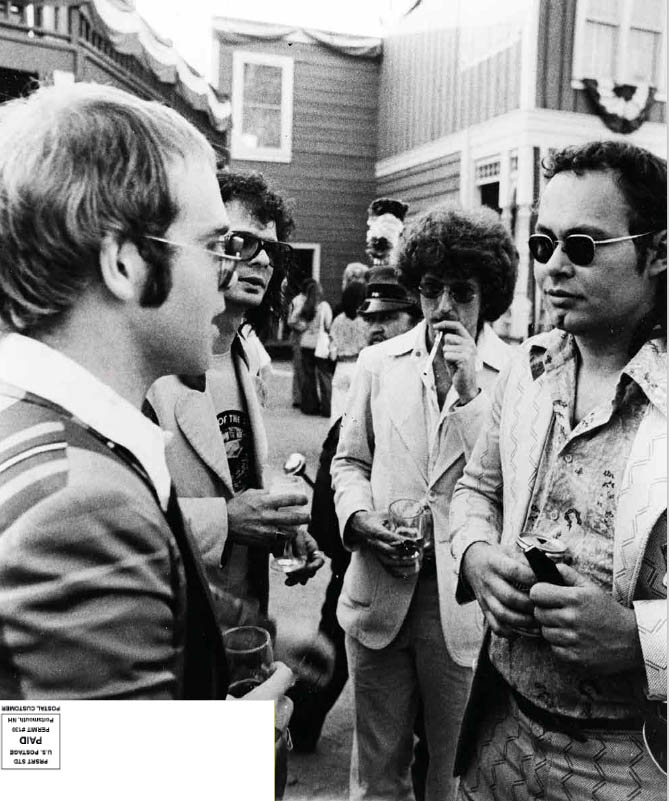 In Hollywood with left to right Elton John, Al Kooper, David Felton and The Author

Several of the twenty interviews in this book occurred over the past few years.  They were posted to Berkshire Fine Arts.  My decision this past winter to create this book initiated intensive activity that entailed editing and revising existing texts, as well as creating new ones.  The texts were sent back to participants for fact-checking.  These interactions also suggested others to be included, and so the book expanded in scope.  There was some detective work in tracking down sources and encouraging their participation.

As a mandate developed to create an oral history, it soon became apparent that limits needed to be imposed.  The book might easily have been two or three times longer than its current form.  There was also the issue of redundancy as the commonality of primary events and key players got retold.  This entailed some contradictions which provide spice to the sauce.

There was so much potential material to deal with that I made the decision not to include the fine arts.  That will be the focus of the next book, Boston Fine Arts:  Museums, Galleries and Artists.

The counterculture emerged during the 1967 Summer of Love in San Francisco.  This book chronicles the emergence of Counterculture in Boston:  1968 – 1980s.  The torch was passed to Boston with social and political emphasis by 1968.

Critic, curator, artist, and art historian, Giuliano is the owner, publisher, and editor of Berkshire Fine Arts (www.berkshirefinearts.com).  He has held staff positions at Boston Herald Traveler, Boston After Dark/Phoenix, Art New England, and Microsoft’s Sidewalk.  He has served as director of exhibitions for the New England School of Art and Design/Suffolk University and has taught art history for Boston University, UMass Lowell, Salem State University, and Framingham State University.  He is a board member of American Theatre Critics Association.

It is a tour de force in conveying the charged and creative atmosphere of those heady years played out mainly in the alternative newspapers and music clubs.

This book makes the case for Boston's place in Counterculture history.

Olivia Deng, an arts and culture writer who also covers politics and social movements. This comes from a review at WBUR, Boston

In presenting this colossal cultural shift Giuliano's talks both to the legends and the foot soldiers, and it is this inclusive approach that makes this book so engaging.

Now art historian Giuliano plunges into that gap with an oral history that takes the story not only back to its roots, before the so-called summer of love, but forward too, to trace how the sentiments, politics and indeed the people adapted to the changing world around them, without ever losing their grip on the culture that they helped to birth.

Dave Thompson is a contributing editor at Goldmine

The sixth book by Charles Giuliano, Counterculture in Boston: 1968–1980s, features new interviews with journalists, authors, radio hosts, producers, and other luminaries, such as George Wein, Jon Landau, Charles Laquidara, and Dexter Gordon. It’s an invaluable oral history of the work, culture, and arts that marked one of the most tumultous periods in U.S history. The book also features several of Giuliano’s photographs from that period, as well as vintage images by other photographers.

Overall, Counterculture in Boston will serve as a primary source for understanding the impact and business dealings of the arts during those two decades. For Boston boomers, this volume will trigger plenty of déjà vu. For younger readers, the conversations show what united action can accomplish in a turbulent era.

. . . ripple effects that have long been underestimated. That's the main point of a new oral history book . . .

Charles, congratulations on the new book! Looks great! It just came across my desk today at Widener Library, and I'm checking it in so it can be cataloged. You're in the canon!

Charles, your writing is exquisite, your task here overwhelming in its complexity. To mix and massacre the metaphorical vehicle - you have been brave to engage with this history, digest it and share it with your public. Thanks for doing this. We are all fortunate that you did. I am requesting that our library secure a copy.

It's good to see this book getting attention. It's a refresher on what the 60s and 70s and the counterculture were really like. This is the 6th book I've edited for Charles Giuliano. All of them have been interesting and so fun to edit, but this one really has broader appeal, not only to those who lived it, but to young people who have their own battles to wage to know that individual voices DO make a difference. Individuals hold the power to change the world. Your Title Goes Here

Since leaving the mill I've been sitting in the car at Big Y reading your book--about the Tea Party. This is amazing stuff. I've got to put it down and get grocery shopping done but I don't want to.

Ron Delia Chiesa!! Fascinating. Loved Lurtsema as snowman, George Frazier as drunk, and WILL CHANDLER!! We knew him well. K (Kahlil) would take a break from studio & walk over to Will's Columbus Avenue shop where there he would enjoy who/what was going on. Will was so friendly and entertaining. K loved that place:) Thanks for memories!

Hey Charles…I’m overwhelmed and overjoyed by the book. Especially impressive are the photos that complement the interviews so well. I’ll call you to discuss, but I can’t thank you enough, not only for the honor of being included, but also for your meticulous endeavors of reaching and insightfully interviewing so many pivotal players who bring back to life those vital years.

David Bieber, Interviewee For The Book

"I don't have heroes or respect elders the way you're supposed to, but as much as I find inspiration from the journalists who came before me, Giuliano is a king,."

A fascinating glimpse into heady times written by someone who was there and told to him by those who drove the counterculture.