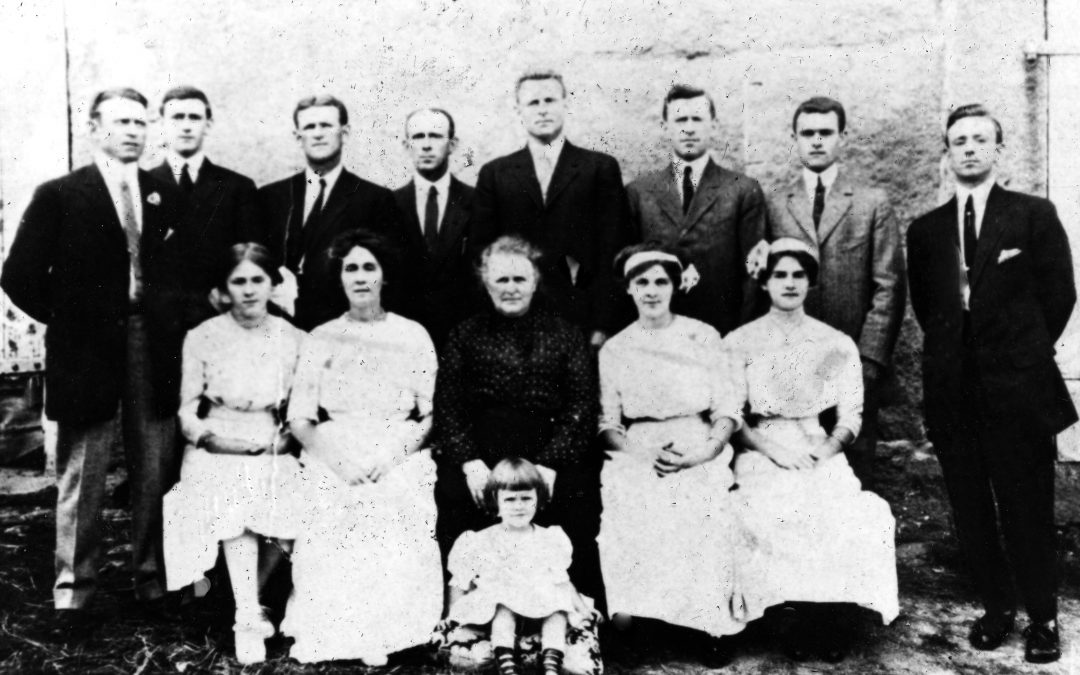 My Irish great grandparents, Patrick and Mary Nugent, homesteaded in Rockport on what later become known locally as Nugent Strip. They raised 13 of which three died in their 20s. My aunt Catherine “Caddy” had no children but the other nine did.

The clan spread far and wide from Hawaii to Bermuda with clusters in Vancouver, Atlantic City, New England and close to home.

My farmer great uncle George Nugent bought a vast tract of land across the road from the leased Beaver Dam Farm which is now abandoned. It was torched in the 1920s but for the ancient stone kitchen now a historic site.

George’s farm contracted to collect city garbage which he fed to hogs. There were also dairy cows. The property included all of Good Harbor Beach which was claimed after a long court battle by the City of Gloucester. The family was swindled out of the land which has been developed as the Nugent Farms condos.

This colorful ancestral history is documented in my book Gloucester Poems: Nugents of Rockport.

We summered on Cape Ann and I grew up to explore and treasure its many and diverse communities. The Portuguese and Italian fishermen settled in Gloucester within walking distance of the docks. Wealthy Yankees including the family of T.S. Eliot had summer “cottages” in Eastern Point. Lobstermen were scattered from Lanesville to Rockport. The iconic Motif #1 signifies that tradition. On any given day tourists can view lobstermen in dories bringing in the catch or loading boats with bait.

The upper class settled in Bass Rocks and Annisquam a charming cul de sac. We eventually built a home there, in Norwood Heights, in 1949 the year my sister Pip was born.

Before that the family rented a cottage in Lanesville’s Red Gates. So named for the entrance from the road that loops Cape Ann. It opened to a woodsy road with cottages on either side. Then opens to a clearing of dwellings with ocean views.

To the left was the imperious home of Fred  Hoffman a prosperous and handsome New Jersey contractor. To me he was the spitting image of Clark Gable.

They were responsible for the flag pole from which the stars and stripes were proudly displayed from dawn to dusk.

On the other side was the rather grand home of the Hung family. He was a restaurateur and frozen food pioneer. We had our first Chinese food at his restaurant near Fenway Park.

Mom and Dad, Jo and Me in Lanesville 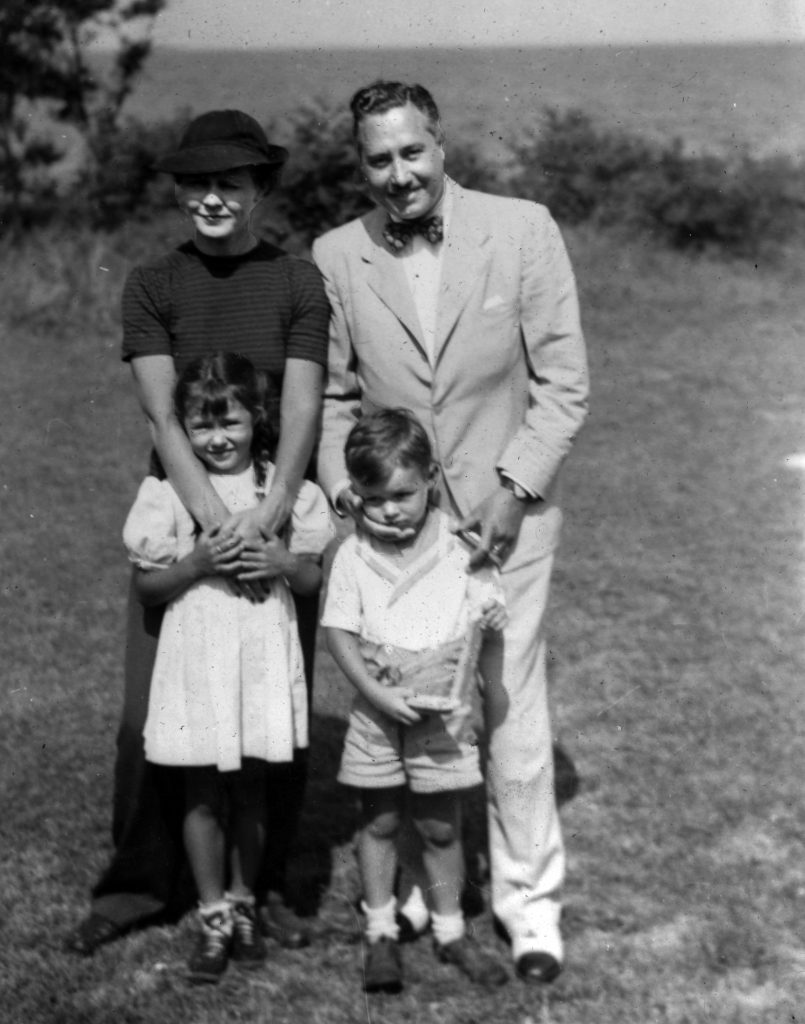 Me on the rocks 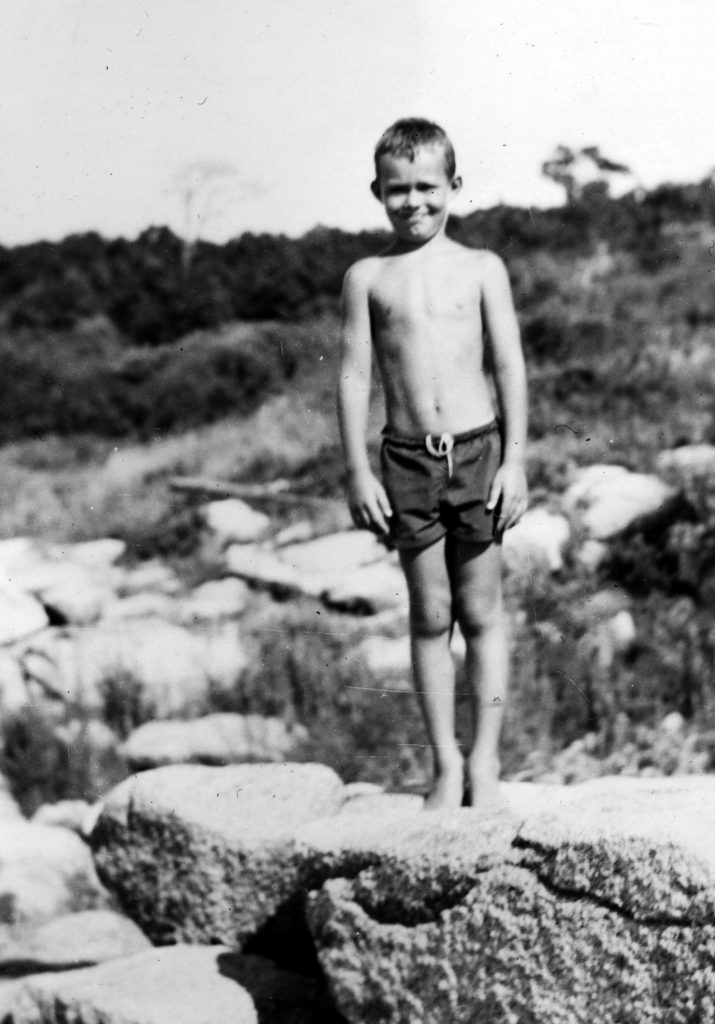 Mom and Dad at Red Gates 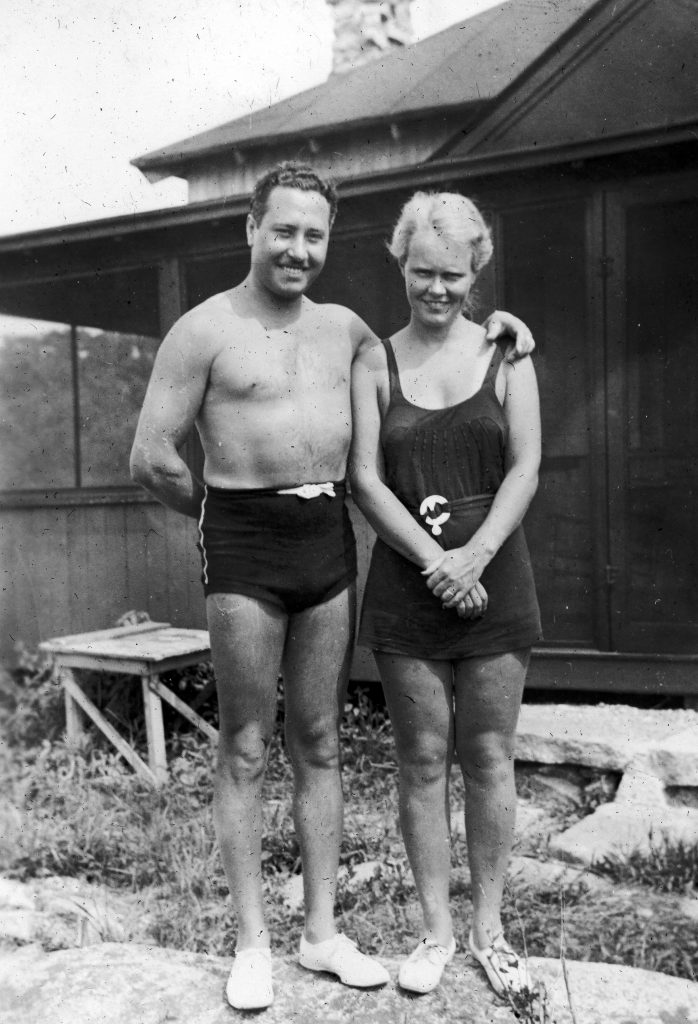 Gram and Mom with Jo and Me absorbed by comics 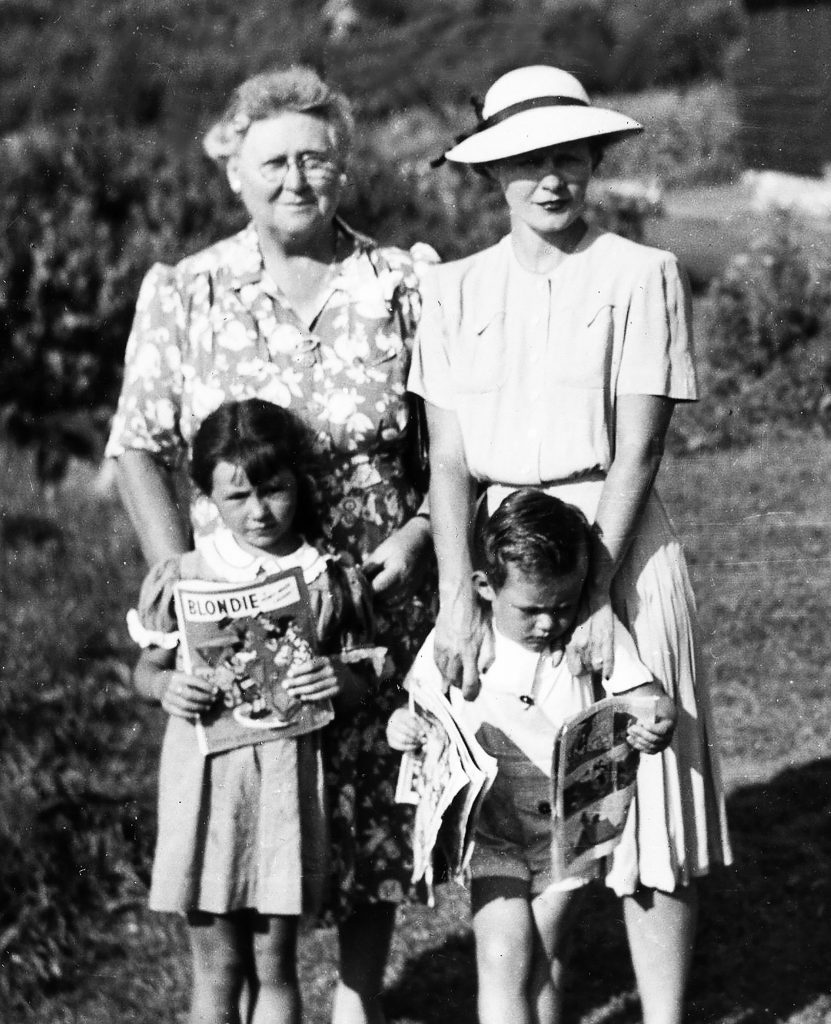 The cottage on the left, since remodled, was our summer home in Red Gates 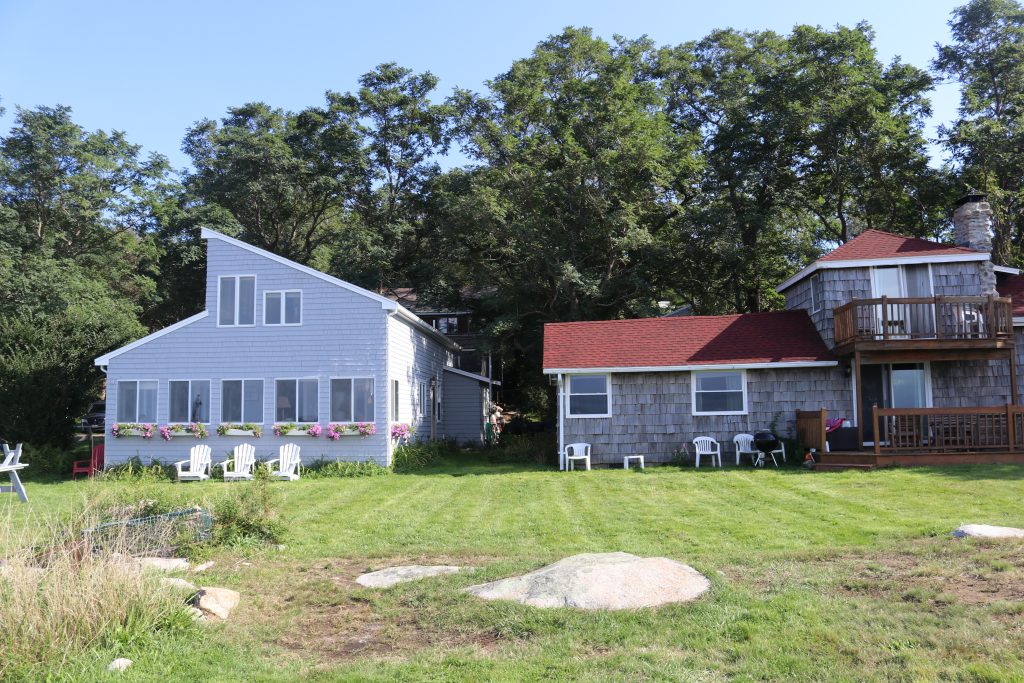 We bathed off the rocks 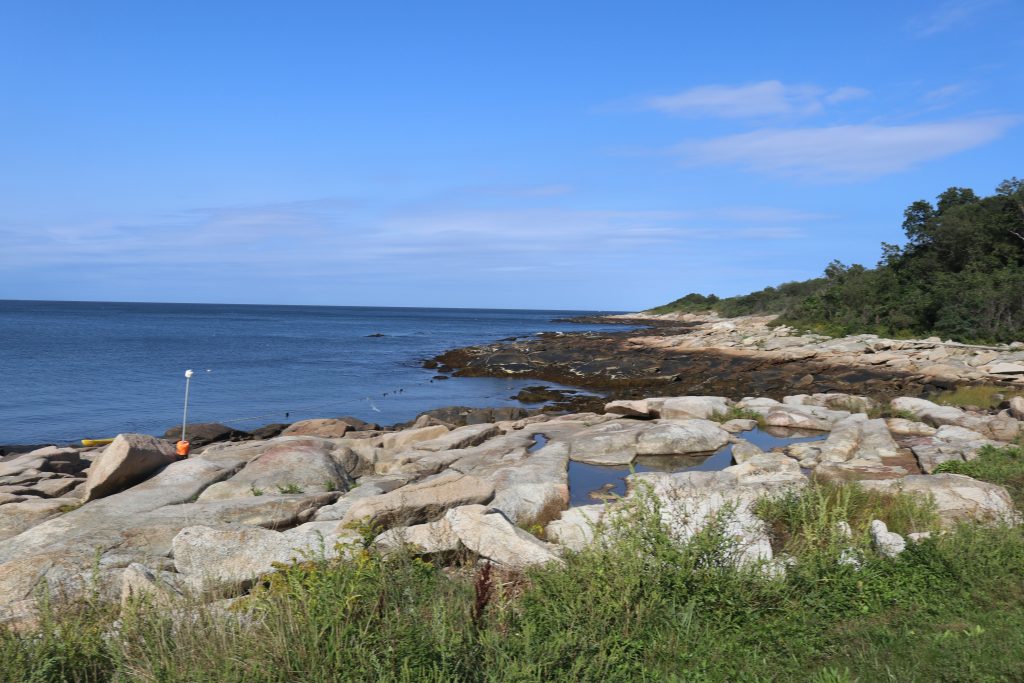 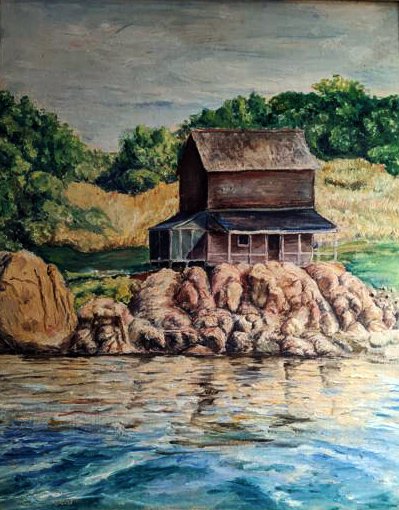 Between these grand dwellings were two cottages. The one we rented was a double. My Uncle Albert Giuliano lived on the other side of ours. There was familial rivalry between myself and cousins, Chippy, and the younger, very odd Edward. We would find him spying on us through windows. Or pretending to punch us saying “It slipped.”

That has become a catchphrase for me and Pip. If something doesn’t quite work we exclaim “It slipped.” To which the response is “Big time.”

With busy medical careers, Mom and Dad were mostly around on weekends.

Caring for us was our saintly and beloved grandmother Josephine Flynn.

Her husband James was a saloon keeper who kept odd hours. Often alone she took to having live-in companions like the redoubtable Maude Henchliff who seemed like a member of the family.

With her husband gone all day, Granny mostly wore a nightgown and housecoat.

There was however a nightly ritual. She would get dressed and dolled up with cosmetics and perfume. It was a habit to greet Grandpa coming home late from the downtown saloon. He would have a late supper and sleep till noon.

Grandma was sociable and loved any excuse for a road trip.

She would take my older sister Jospehine and myself  to see Nugents. In Pigeon Cove, between Lanesville and Rockport, we visited then elderly sisters. They served us tea and Pepperidge Farm cookies.

I had to pee and was told to use the outhouse. Pew. It proved to be a stinky experience.

Mom told me that at Beaver Dam Farm there were several, side by side, often occupied seats. There were extra hands during the busy summer season. Old Sear’s Roebuck catalogs served as TP.

Our cottage with thin-framed walls was primitive. There was a kerosene stove and icebox. It was great fun when once a week the iceman cometh. A brawny man he slapped a slab of ice on his back over a rubber apron. The kids ganged around him begging for chips of ice.

There was no sandy beach but at high tide, you could swim off the rocks. Also, I did a lot of fishing for mostly ocean perch which we called cunners. Now and then I would hook a sand shark which was kindah scary. We baited hooks with periwinkles.

Our best friends were the wonderful Beasley brothers. The older one was a bodybuilder who reminded me of superman. He would make Molotov cocktails which he lit and hurled at the rocks.

The explosion of flame was spectacular.

Italian relatives would come and stay with Albert’s family. I thought it very odd when they harvested mussels and gorged on them. Somehow that seemed barbaric to me. Now it seems through Global Warming the local mussels are gone.

My Aunt Olga was convinced one summer that Flying Saucers would be landing at Red Gates. She had seen them. It would happen any day now.

It was another reason to shy away from my relatives.

But Olga’s mother, Mrs. Payatek, was really good to us kids. She was the only one to be counted on to buy from our lemonade stand. Or to purchase our hand painted mussel shells.

My early ventures in capitalism were utter failures. Which is, I guess, why I went into the arts.

One summer Mom bought land in Annisquam. Life would be different. How I came to miss funky Red Gates where kids would walk more than a mile for a bottle of pop on a hot summer day.