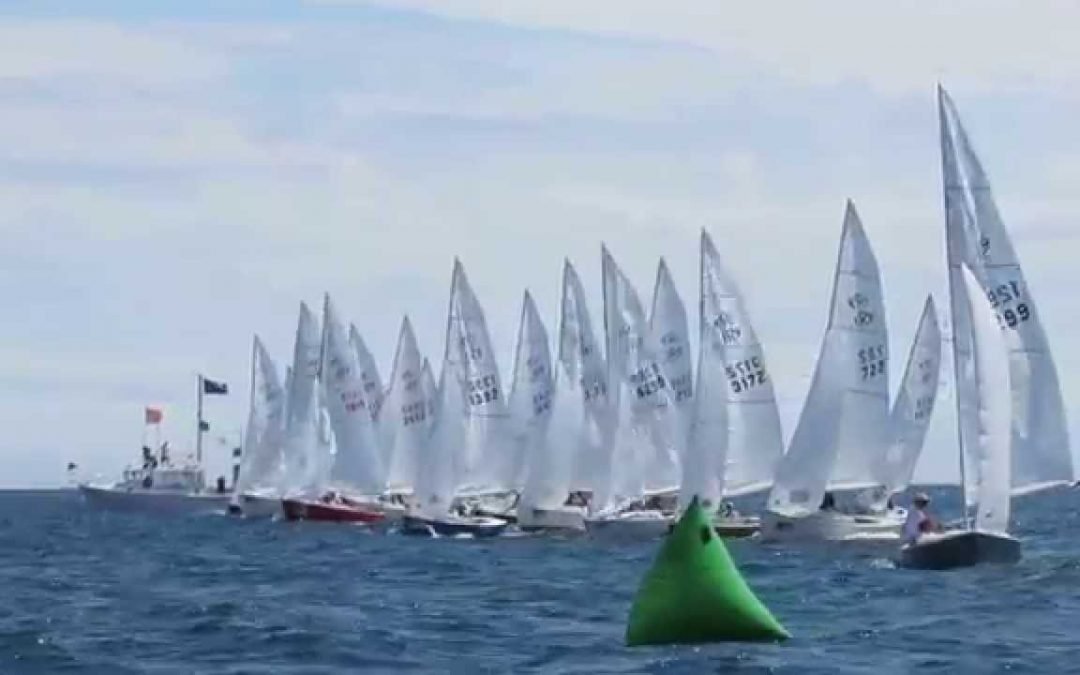 As a teenager, except for the dead of winter, I was a year-round competitive sailor.

With a “coach,” Mr. Powers, I comprised the sailing “team” of Boston Latin School.

On Saturdays I took the T from Brookline to Sullivan Square in Charlestown. From there, in the Fall and Spring, he drove me to Mystic Lake in Medford.

There I participated with other schools in the racing program organized by the eccentric Mary Hogan of Marblehead. She was a part of the development of the small, plywood Turnabouts which flourished as suitable for training young sailors. Many yacht clubs, including the Annisquam Yacht Club, had fleets of them.

They were squat, wide beamed and tubby but suitable for two. The catboats also were capable of using spinnakers which entailed another useful skill level.

The Turnabouts were inexpensive and could even be purchased as kits. The Yacht Club assembled one for training in its Junior Program.

Hogan had a dozen or so boats at her command. Using a clip board she organized days of short races. The skippers and crews changed boats after each race. That evened the competitive odds. She also coached the finer points of racing.

It was great fun and I much enjoyed the social life. In particular, the petite, jocular, Audet twins, Elise and Elaine. They were friendly and laughed at my jokes suggesting that I should be a comic and appear on the Tonight Show.

They talked me into taking a blind date to their senior prom. The pitch was that we would all be together particularly for the after party. My date was a dud but during a double cut my new partner handed me a note. I excused myself to the men’s room to read “Hi, I’m Grace, call me.” I did for an adventurous date the next week.

Recently, after all these years, I connected with Elise.

The intriguing twins married into the arts. Elise to photographer and media producer, Fred Brink, one of the initial Smart Ducky’s with Todd McKiee and Marty Mull. I reviewed their whimsical first exhibition for the Herald Traveler. They all met at RISD.  Elaine was married to Nicholas Negroponte founder of the MIT Media Lab.

Elise had a different version of the prom. “I think my mother called you and asked you to take Elaine to the prom (a hard sell, I think)” she wrote.  “I cornered my neighbor David Tiffany in my barn and said I wouldn’t let him out ‘til he agreed to take me. I live in Marblehead.  Why don’t you move back to Gloucester?  It’s a good place.”

Hogan’s Heroes, so to speak, raced against college teams. There was a regatta organized at MIT on the Charles River. We sailed the Tech Dingys in a competition among top New England high school sailors. I placed third for Boston Latin School. Perhaps Mr. Powers earned a bonus for that.

I got to be friends with Polly Hogan and an expanding gang in Marblehead. They could be relied on to drive to my infamous parties in Annisquam. During Marblehead Race Week, and other sailing events, I got to bunk with the Hogans. They all sailed except for her brother who worked on hot rods. Polly later was active in Boston theatre. 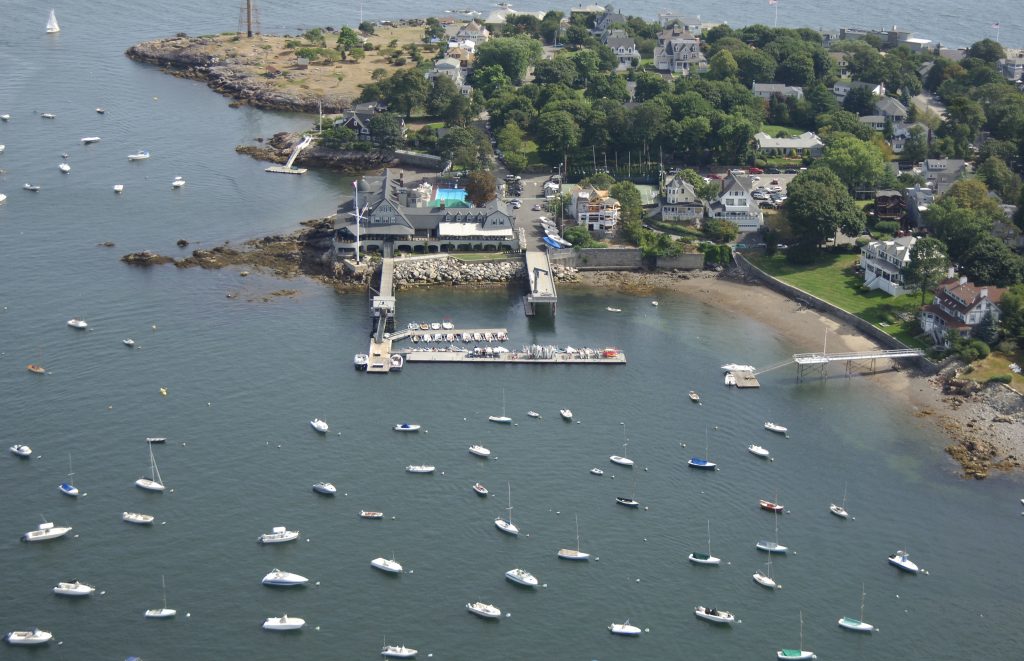 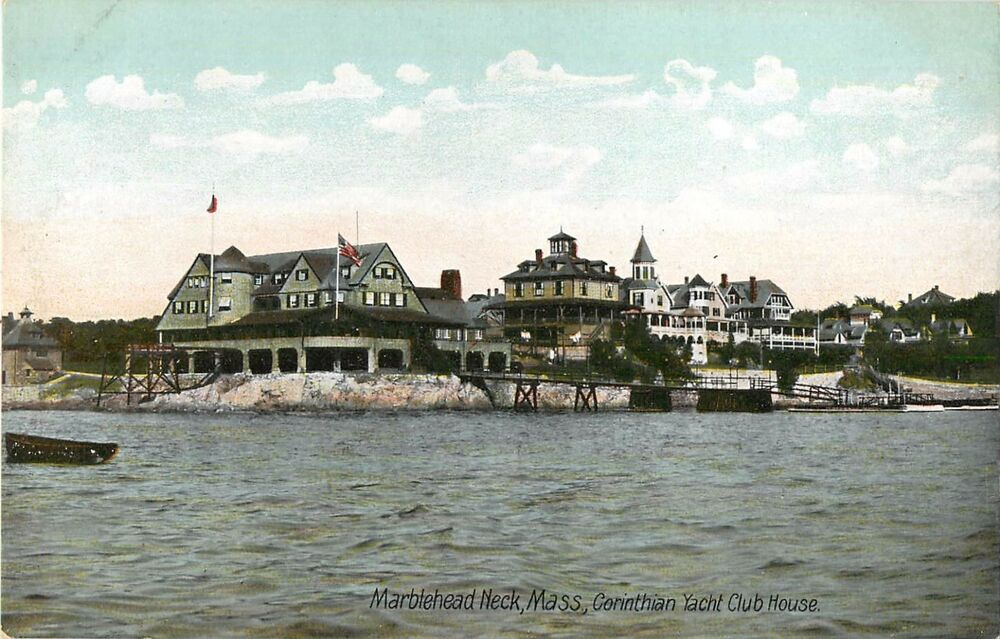 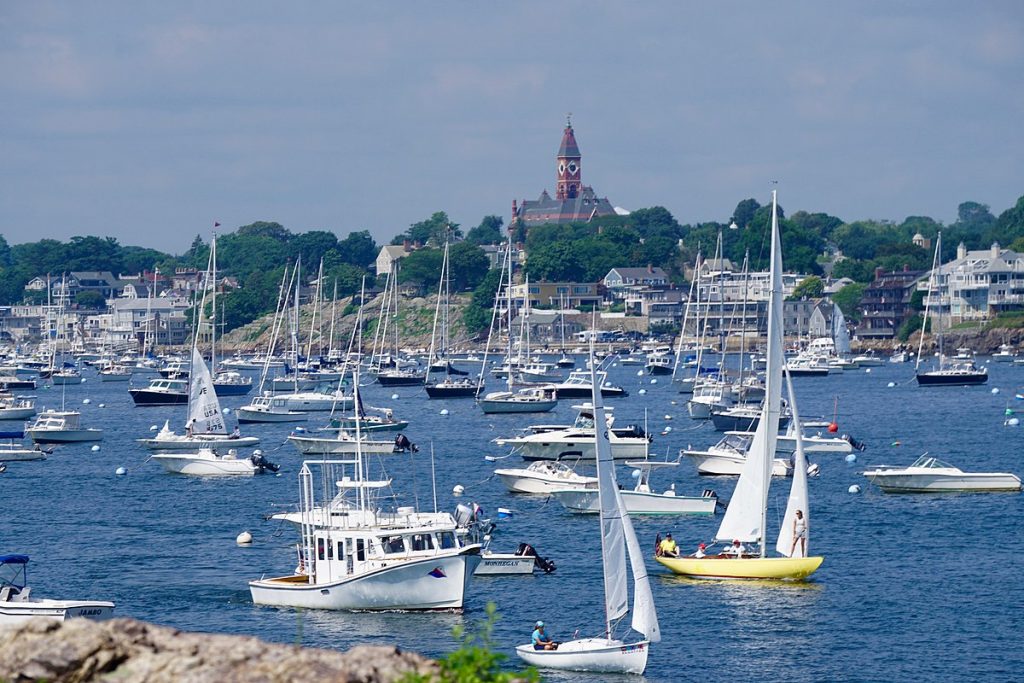 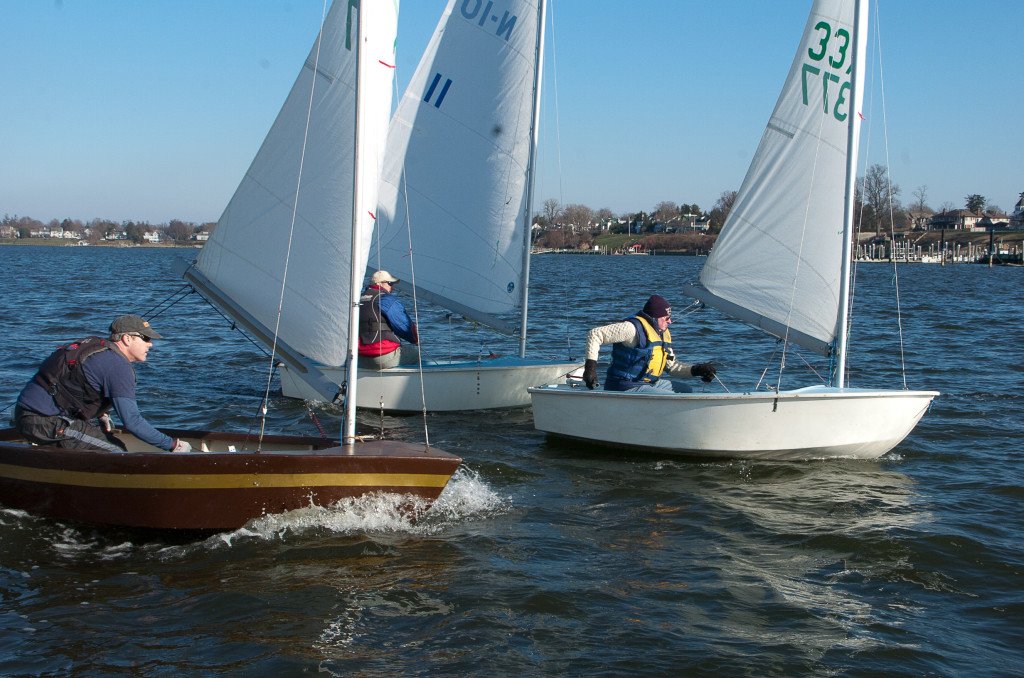 The stuffy old Eastern in Marblehead 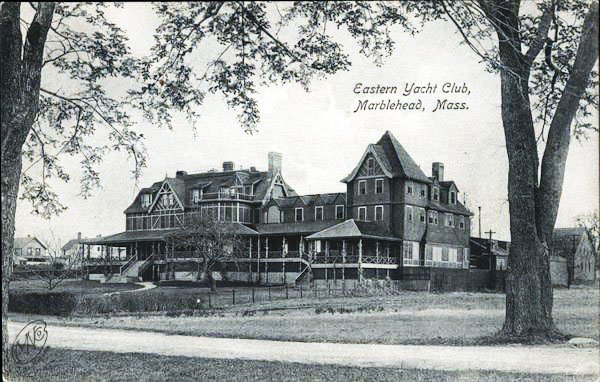 The Pleon was strictly kid's stuff 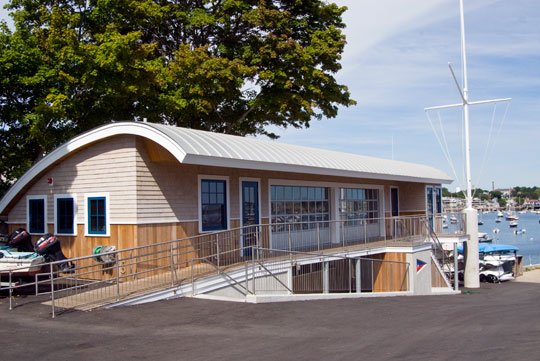 The highlight of the summer sailing season was Marblehead Race Week. During which the harbor was packed. It was a major challenge to find a spot to moor your boat.

The Annisquam Yacht Club organized tows to Marblehead. There was excited buzz as we tied onto loops on either side of the thick rope. The Fish boats were all together. We packed lunch and soda for the voyage.

From his boat Mr. Fawcett barked orders as he attempted to herd cats. Some bozo was always messing up. Finally, we got underway for the nautical adventure. The trick was to steer in line which got tricky in the swift tides going through the cut bridge to Gloucester Harbor. Then beyond Eastern Point and along the shore of Magnolia, past Beverly and Salem, to Marblehead Harbor.

It was quite a feat to get there safe and sound. Once ashore it was a mad dash to the restrooms. In cases of dire need there was the centerboard box but that didn’t work for the ladies.

There are three yacht clubs in Marblehead. The outermost, where the starting line is located, is the Corinthian. It was the most congenial and the porch was packed during race week. One could lie about age and try to get served. The Corinthian hosted a raucous week-long party.

Next was the stuffy Eastern which did not take kindly to strangers. One might just pop in to use the head.

The third is the Pleon or junior yacht club. I checked it out but the action was bogus, strictly kid stuff and no fun.

There were car pools to get us back and forth from Squam. But I was hanging out with pals. One sleep-over entailed a grand mansion but it was too stiff for my taste compared to the funky Hogans.

There was a rush of adrenalin as you rigged and headed to the clutter of mixed classes near the starting line. We each had a map of the course which was vast, on mostly open water, and unfamiliar.

Everything was different from racing in Annisquam. That leveled the playing field as I geared for dueling with my nemesis Bobby Dangelmeyer.

It could get rough out there and for one race a squall capsized half the fleet. Rick Lordan and I fared well staying afloat and finishing first. In celebration we yelled the name of our boat Ufeschenke, Ufeschenke. That’s snail or periwinkle in German, but my wife Astrid, who is bilingual, says she never heard the word.

What’s in a name?

On another day, with a stiff breeze, it was tricky to stay clear of the fleet.

Rounding the last mark it was a tack into the headwind of the finish line.

We were splitting tacks timed to perfection. Head-to-head with Bobby the strategy was to be on starboard tack and nip the tip of the finish line.

I had it perfectly calculated when we precisely came about and hiked out to keep the boat flat and headed up efficiently.

Close to the finish Bobby was headed to collide with us. I shouted “Starboard” which, by sailing rules, means that I had right of way. Sailing to port he was obligated to yield.

I kept yelling starboard but he refused to give way. At the last second, to avoid collision, I veered off. He tacked and was first over the line. I was furious.

Back at the Corinthian I went to the race committee to lodge a protest. They told me not to bother as Bobby had been eliminated. They had seen it all and added the comment that it was unsportsmanlike conduct. So I won the race and got the trophy.

Later in the summer I was back in Marblehead for the National Turnabout Championship. I borrowed Pip’s boat Skipperdee. By trailer it was driven to the edge of the harbor, rigged, and launched.

The day of the first race there was a huge fleet jockeying for position. It was a hopeless clutter and I finished somewhere in the middle of the pack.

Based on that, for the next races the fleet was split into two divisions. Polly also had bad luck. We decided to combine forces and sail together. I skippered and she handled the spinnaker.

We won the race handily and sailed through half of the first division. That night we partied like it was 1999. Well, kindah, as it was more likely 1959.