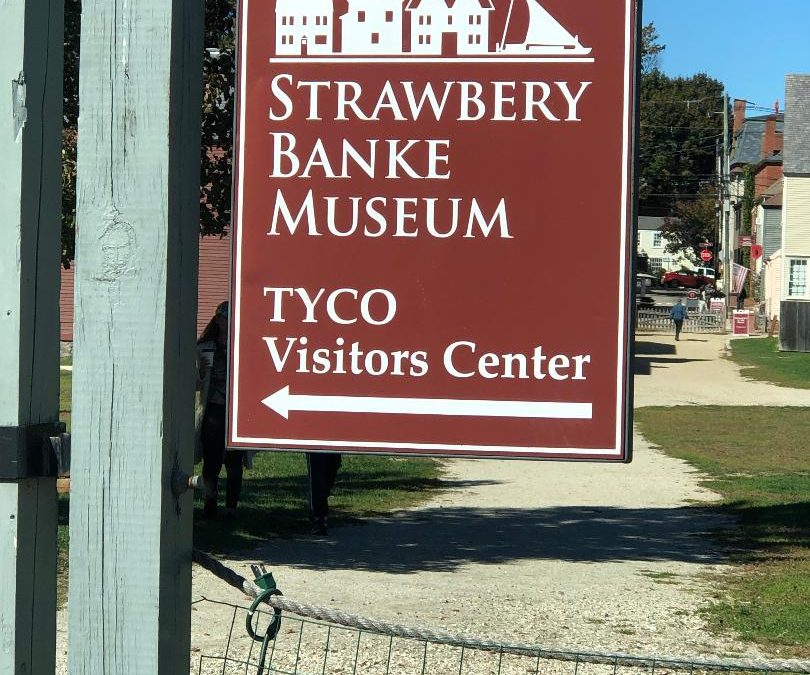 The post and beam 17th century homes of New England were created in the manner of British homes of that period by Colonial settlers.

While often restored, and stripped of later additions, a remarkable number of these dwellings still stand. Typically, they are built around a great hearth and single chimney with symmetrical rooms on two floors.

We encountered The Sherburne House during a recent visit to Strawbery Banke in Portsmouth, New Hampshire. It is the oldest existing building from the settlement at the Puddle Dock site which is now filled in and comprises a village green. During the winter it is flooded for skating.

English colonists established a settlement in 1623 and built houses along the Piscataqua River and shelter cove that is now Portsmouth Harbor. They named the settlement “Strawbery Bank” — either for the wild strawberries growing along the banks, or for an estate in England.

As communities age and become blighted through economic downturns and neglect one approach “urban renewal” was to raze and rebuild. That was to be the fate of Shelburne House, then a ramshackle five-unit apartment complex.

The city evicted the residents. The entire neighborhood was scheduled for demolition. Determined to preserve its houses, local activists formed Strawbery Banke, Inc. in 1958 and the subsequent museum acquired the 10-acre site and about 30 buildings.

Of these one may visit 17 dwellings. In some, docents in period costume engage patrons with dialogues about the owners, their families, crafts and lifestyles. The houses comprise: 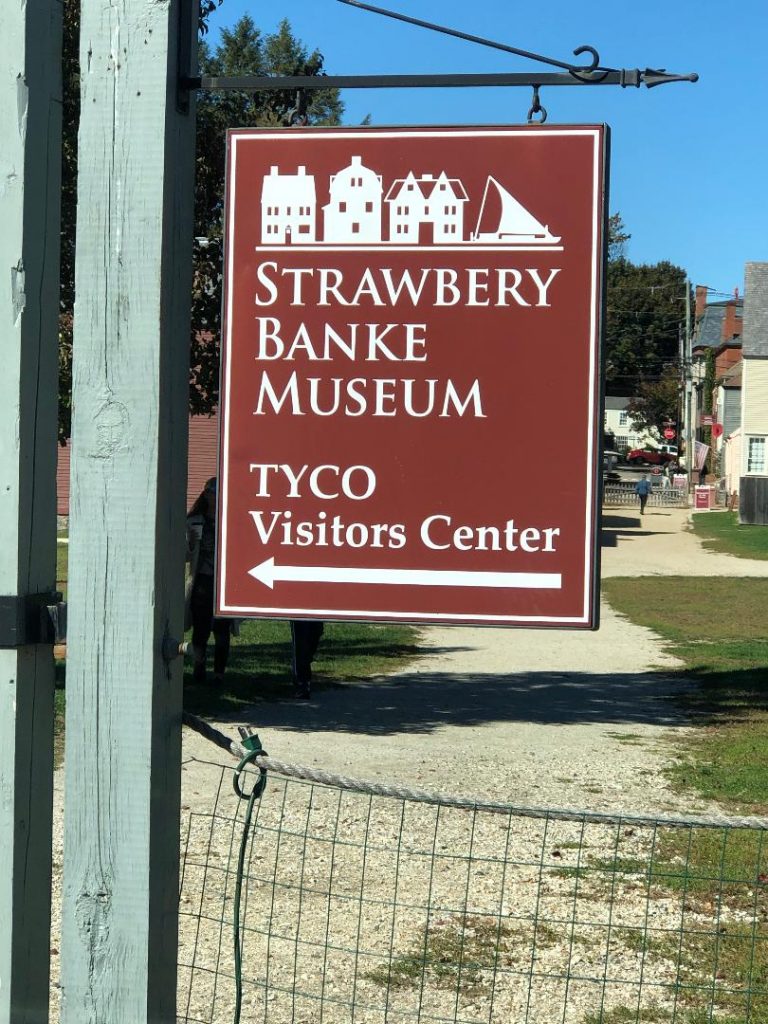 The filled in pond is flooded for winter skating 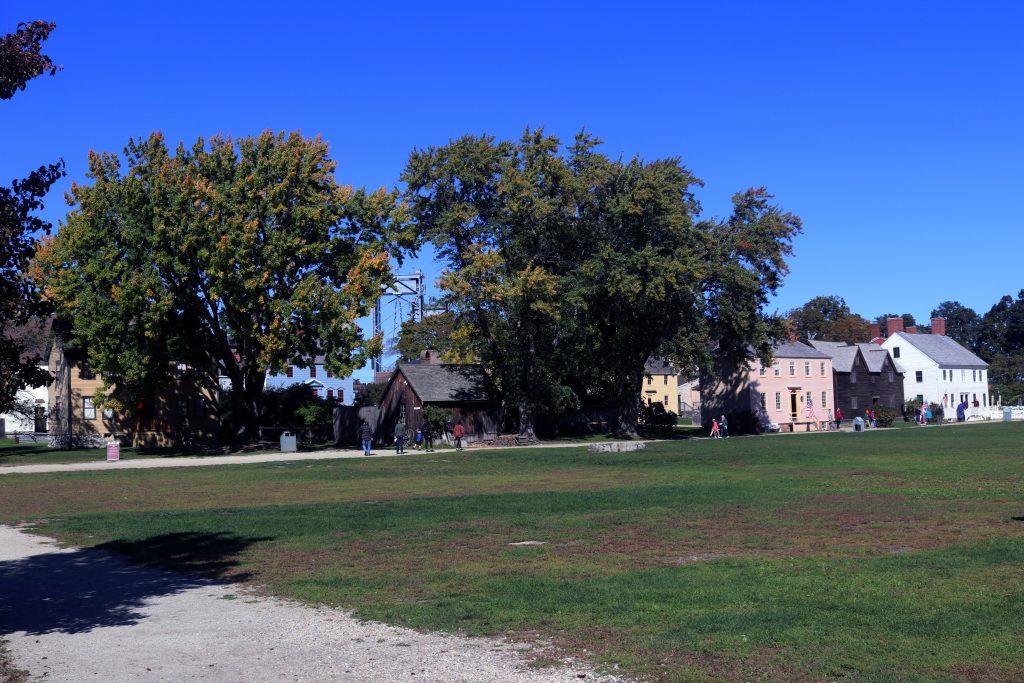 The threat of razing a 17th century building sparked the museum project. 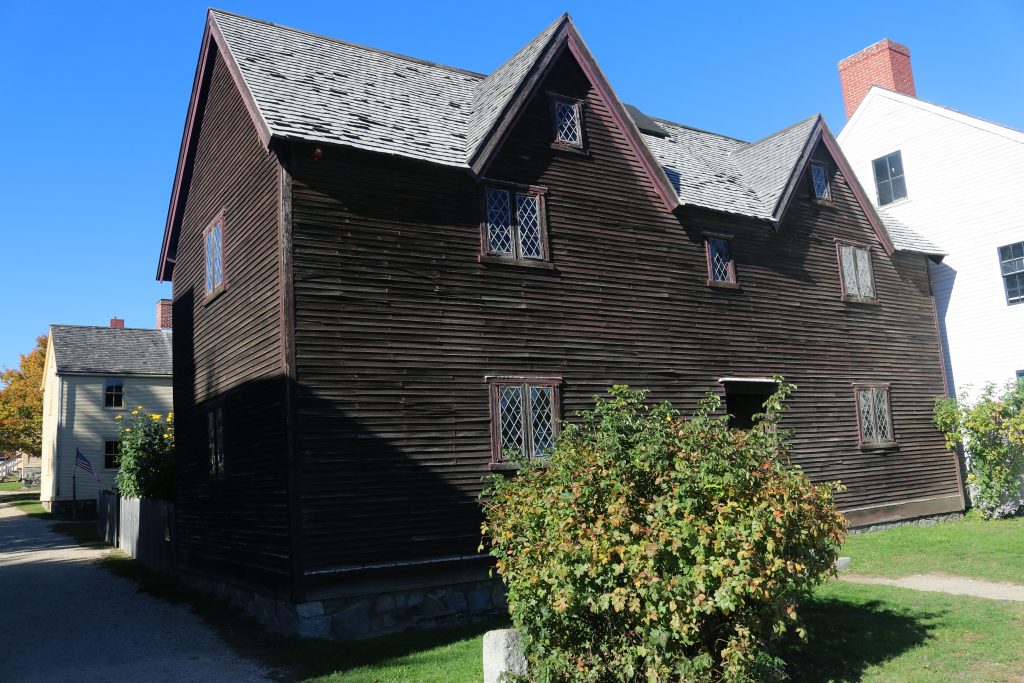 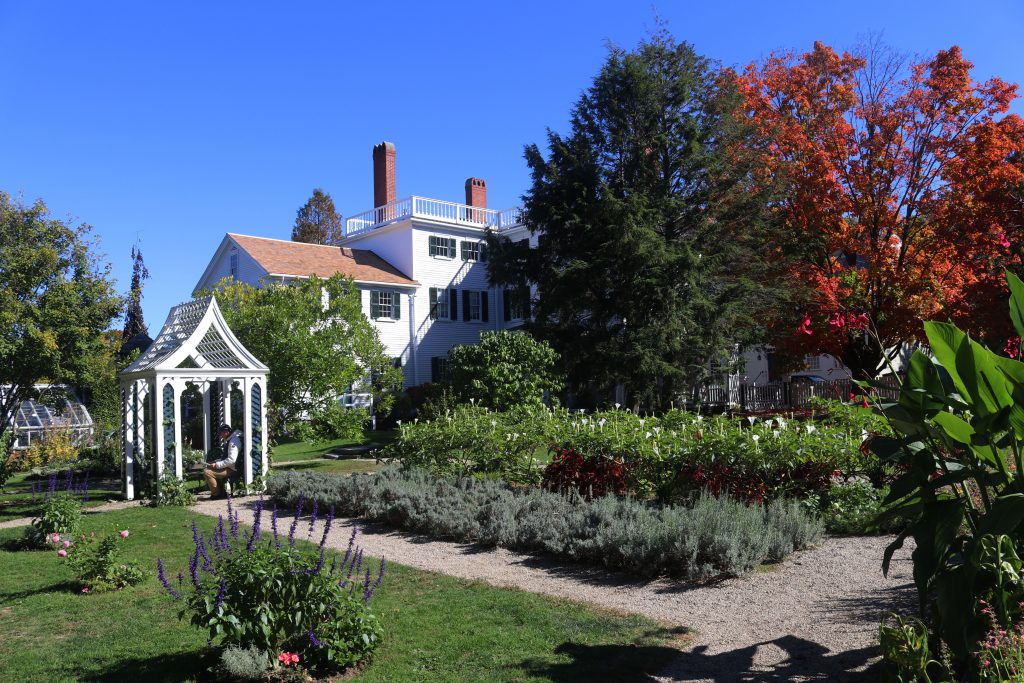 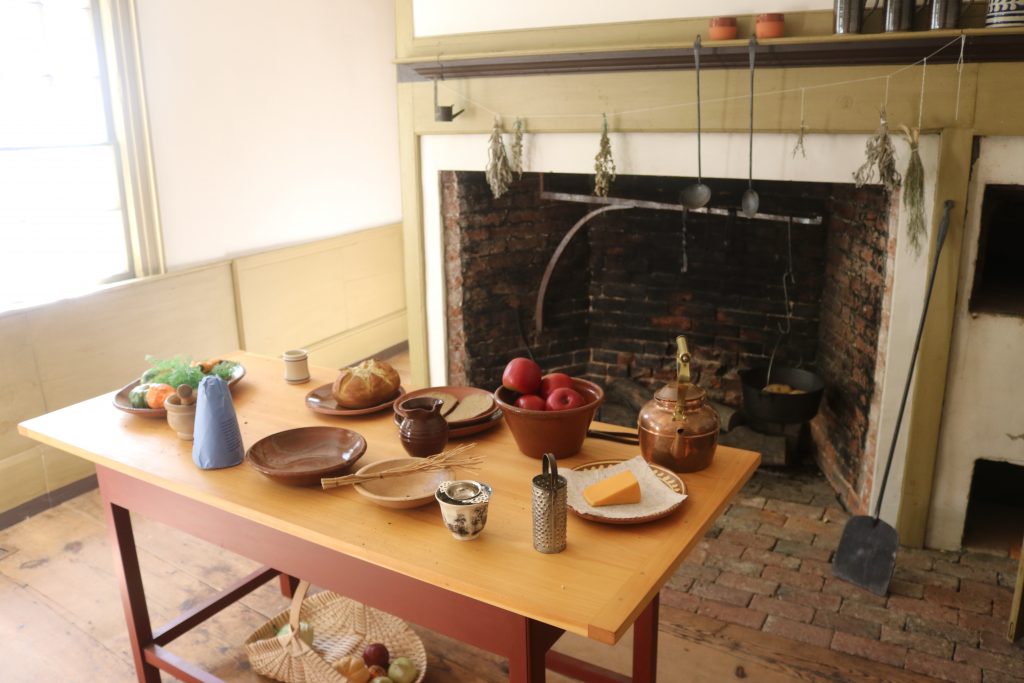 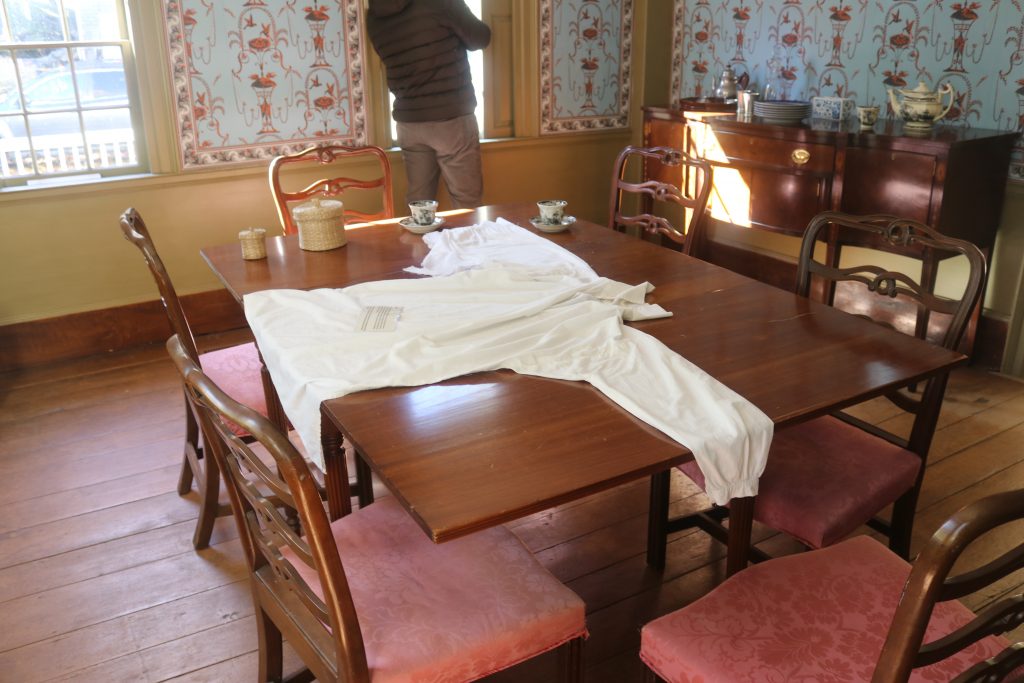 In traditional costume the docent tells of family life. 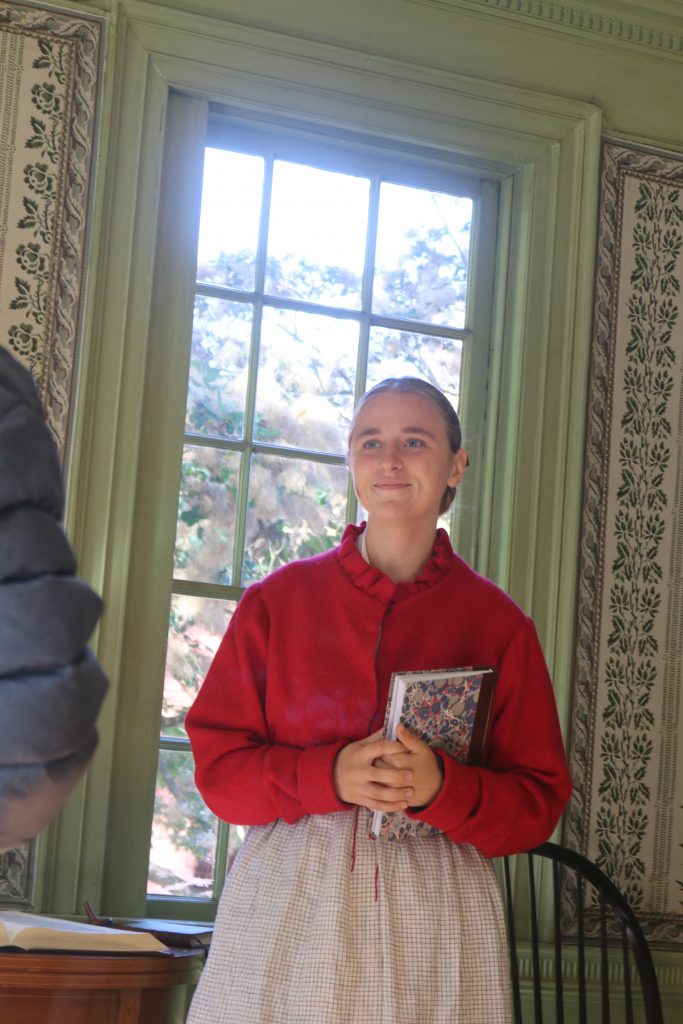 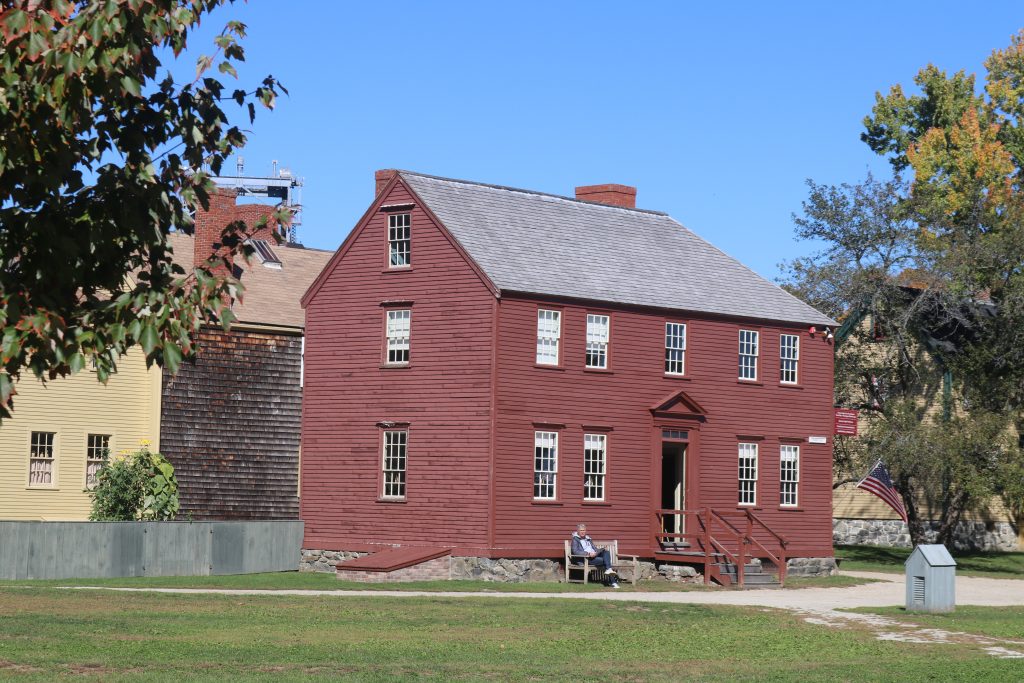 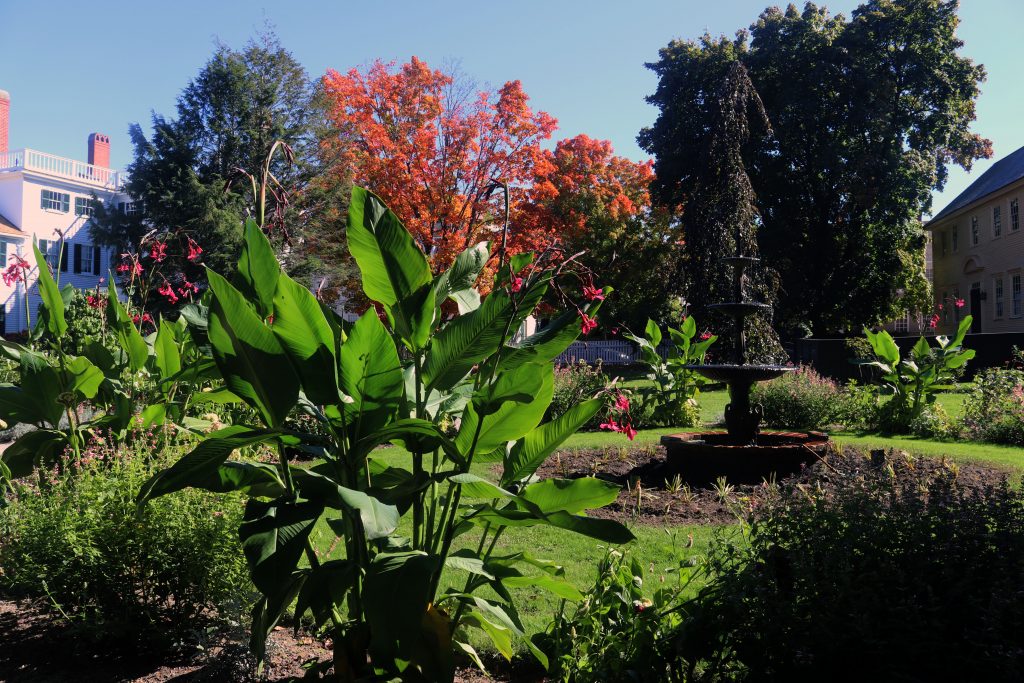 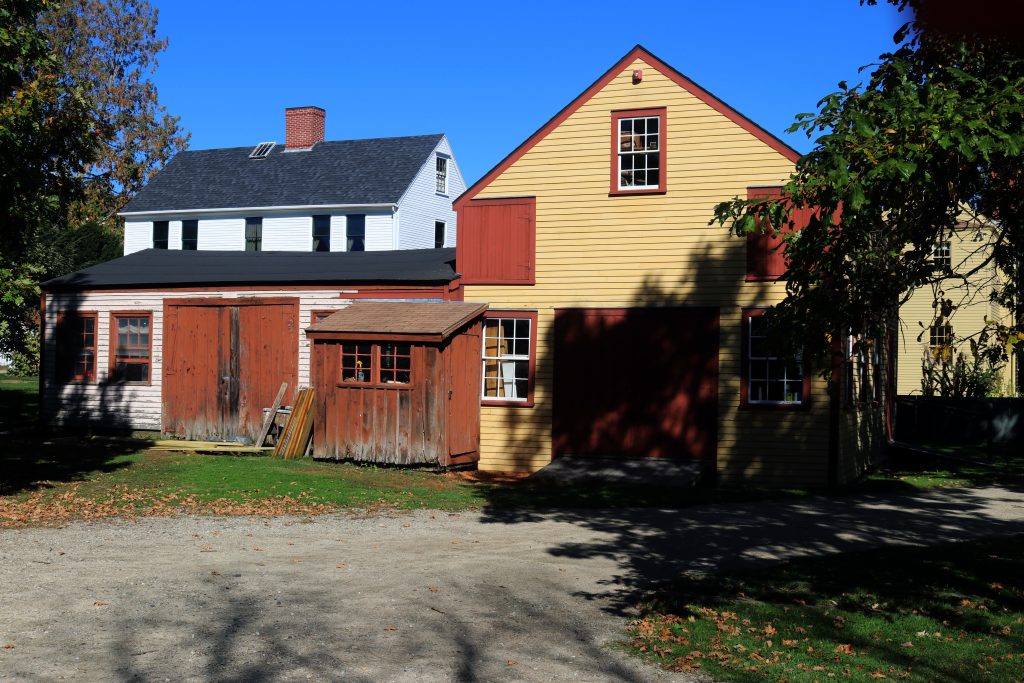 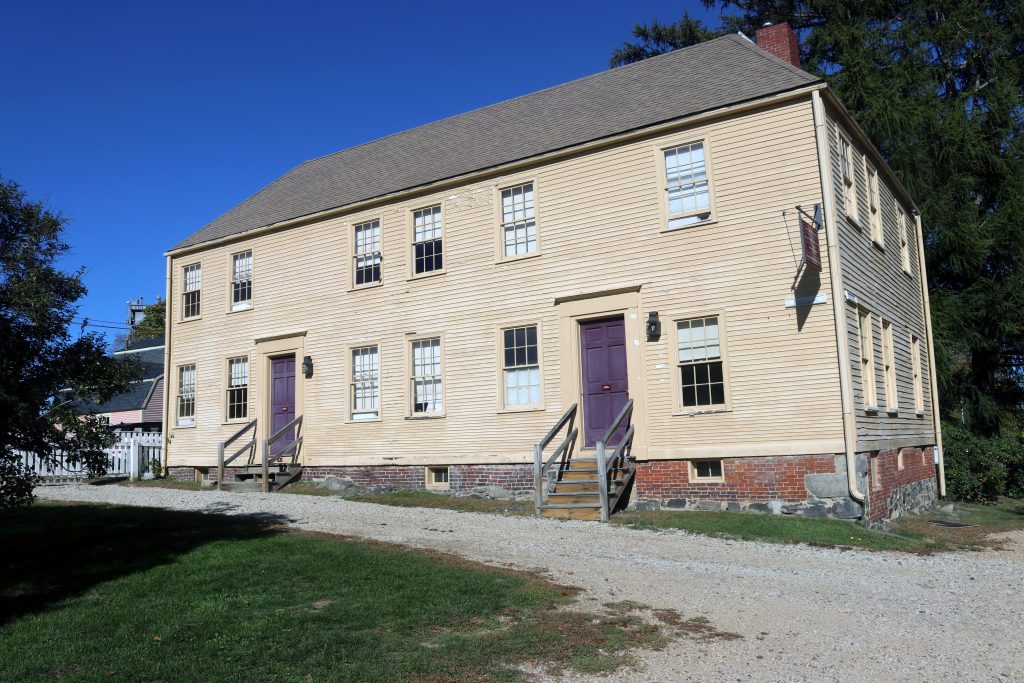 A garden entrance to a home 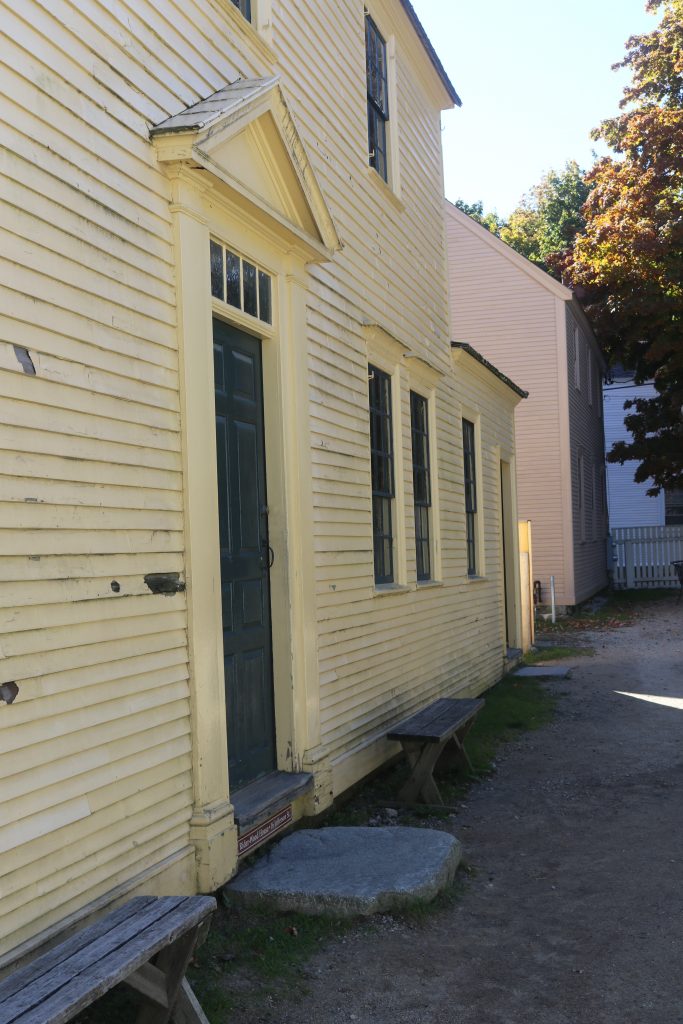 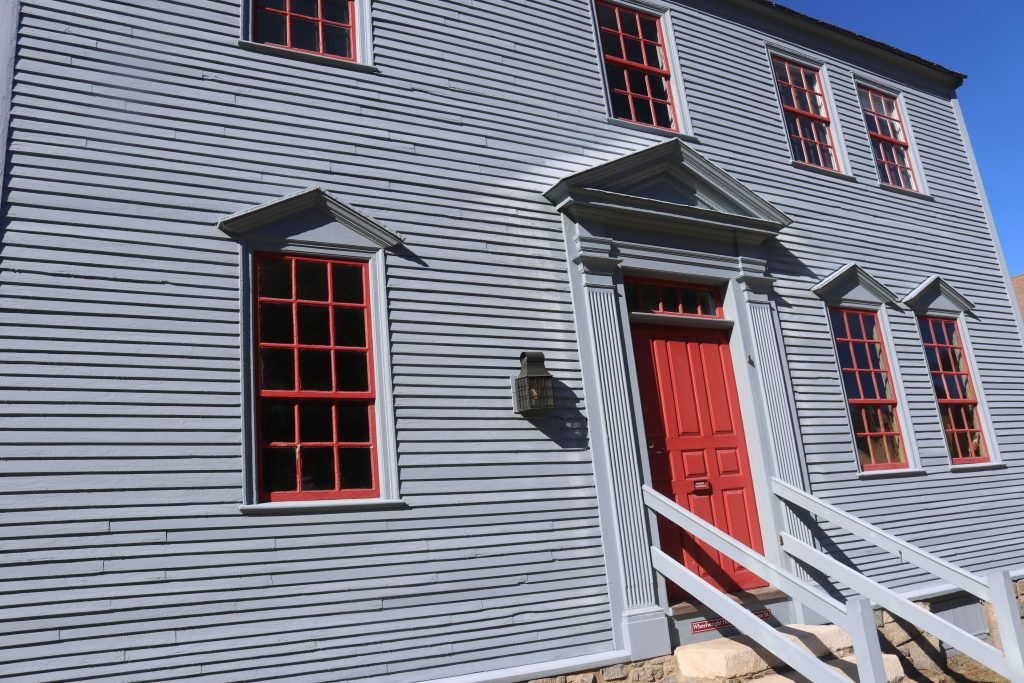 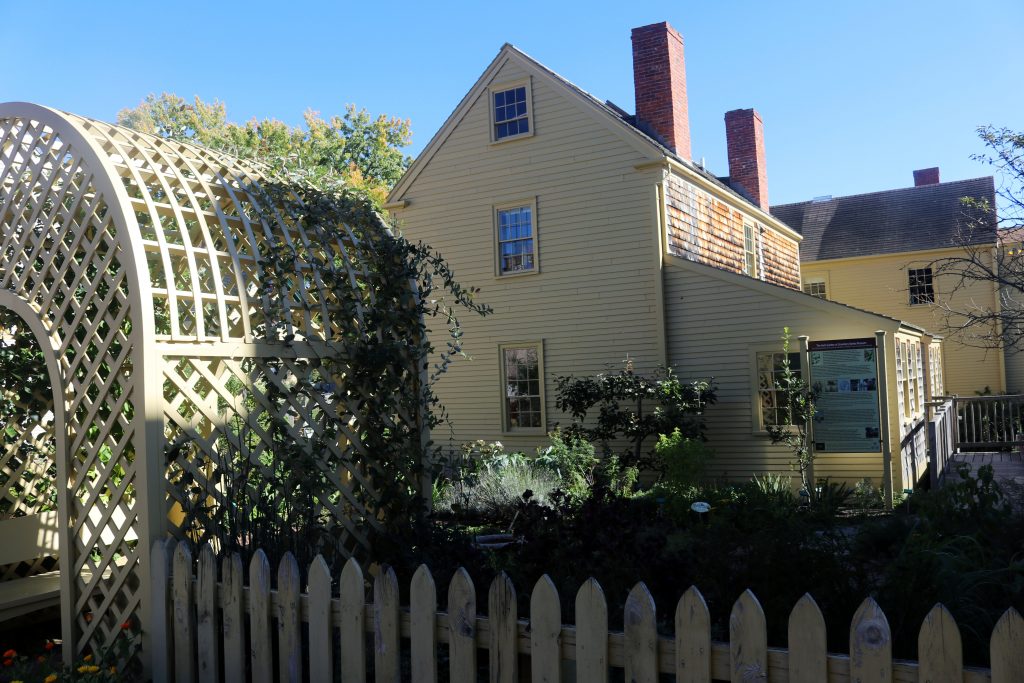 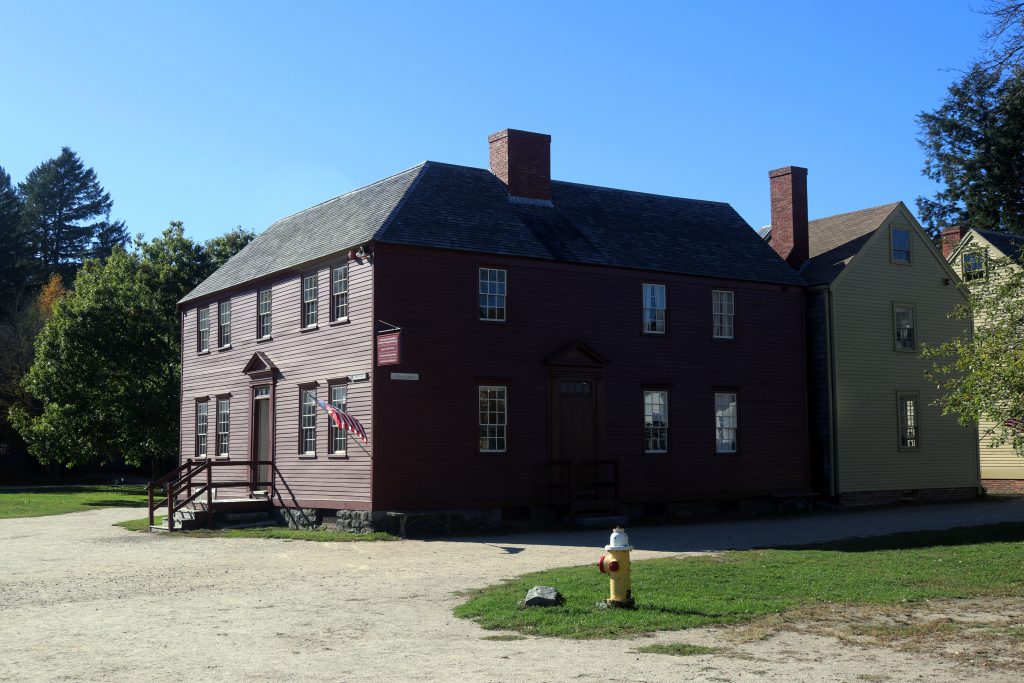 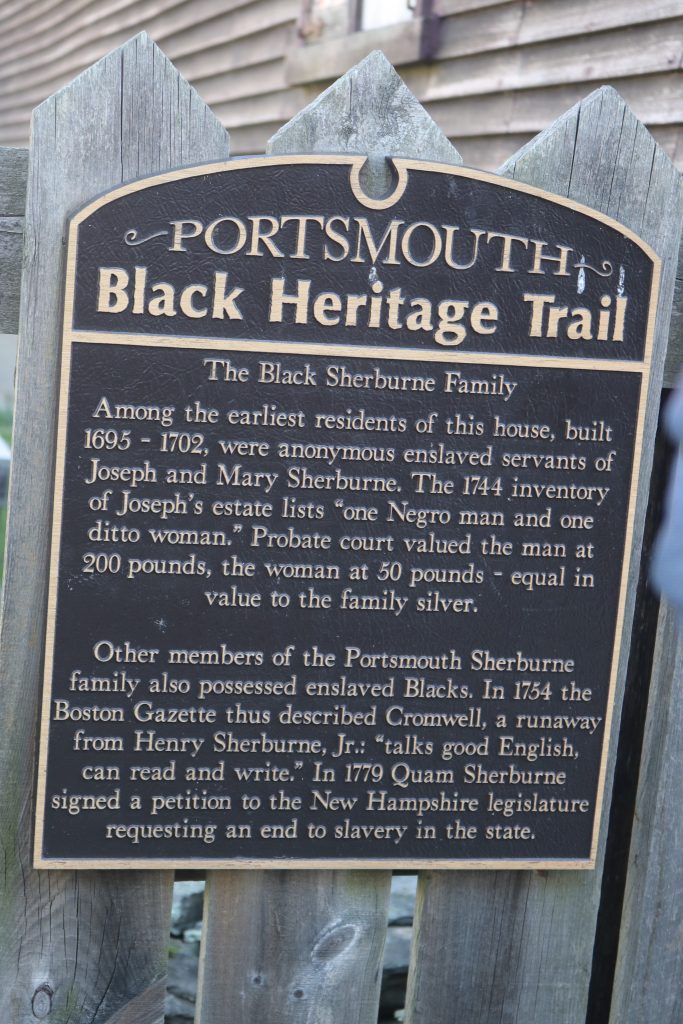 We had an interesting encounter with a lady in period mode stationed at the Marden-Abbott Store and House. The store is stocked as it would have been during the era of World War II of which I am old enough to have vivid memories.

We bantered about cans of Spam, margarine stained to resemble butter, and food rationing cards. I recalled a maid squeezing a plastic margarine bag to spread the dot of yellow, buttery dye. During the war items like real butter, sugar, and coffee were rare.  When Mom and I shopped at Natt the butcher’s, he would slice me a piece of bologna as a treat. I talked about following the war in Life Magazine and Movietone news when the family went to the movies on Sunday.

Surely, I was not the usual visitor but she stuck to her well-crafted persona while laughing at our twist and turns.

Visiting Strawbery Banke has long been on my bucket list as a former professor of American art and architecture. While in graduate school, on weekends, I took numerous day trips from Cambridge to see the historic homes I was studying with Dr. Margaret Supplee Smith. These included historic Salem and its Federal style homes by Samuel McIntire (1757- 1811), the Parson Capen home in Topsfield, Whipple House in Ipswich, Balch House in Beverly and the later period of grand Captain’s Homes in Newburyport.

On a glorious spring day Peggy organized a tour of the Newport mansions of the Gilded Age. We enjoyed a picnic lunch on the lawn of The Breakers looking out at the ocean. In a loop around the ocean drive we passed the fortified home of Mafia don, Raymond Patriaca. He was not at home at the time having taken up residence in the slammer.

By the 1960s, the devastation of urban renewal became ever more pernicious. Communities like North Adams, where we live, were given subsidies to tear down properties. That resulted in the loss of half of the downtown replaced by a parking lot. As well as a Route Two highway extension that zips traffic through the city. That was a death-nell for local merchants. There is now much discussion about bringing traffic back to downtown North Adams.

The plan was also to demolish the 17 acre Sprague Electric complex and replace it with another parking lot. Tom Krens, the director of the Williams Collage Museum of Art, had another idea that after many fits and starts evolved into MASS MoCA.

We reside in a 40 unit artist/loft building in one of a number of former factories that processed cotton for Arnold Printworks which preceded Sprague Electric. MoCA proved to be a magnet that has attracted an every growing artist’s community that has revitalized the once stagnant economy of Northern Berkshire County.

Historic preservation is more than just a means of saving old buildings. It has evolved as a total strategy for community development and revitalization.

Urban Renewal in the 1960s, under Boston Mayor John Collins and Monsignor Francis Lally, was focused on destruction. They gutted the red light district of Scollay Square to create Boston’s vast and numbingly enervating Government Center. That spawned the brutalist-style, cast concrete, upside down ziggurat of the “new” city hall. The international competition to design City Hall, in 1962, was won by three Columbia University professors, Kallmann, McKinnell & Knowles.

It opened in 1968 under new mayor Kevin White. It was soon deemed a disaster and former Mayor Tom Menino called for plans to replace it.

Collins and Lally took a wrecker’s ball to the old West End at the base of Beacon Hill. A thriving multi-ethnic community was replaced by several sterile, generic, apartment complexes. The development abuts the former Charles Street Jail and the vast campus of Massachusetts General Hospital.

Given their druthers, Collins and Lally eyed leveling then seedy Quincy Market. That was saved through the development of Ben Thompson and Associates. Per square foot it is now among the most expensive and valuable retail properties in America. That firm took the same concept to preserve and develop the waterfront of Baltimore.

Quincy Market was constructed in 1825 as designed by Alexander Parris. It was a complex of three long buildings that abutted the waterfront. That was pushed back as much of Boston was transformed by landfill. So its function changed over the years evolving into the city’s primary meat, produce and flower market. It included the landmark Durgin Park restaurant which was noted for huge portions of roast beef served family style by surly waitresses. There was also an all night diner, Mondo’s, with a cheap ‘farmer’s special’ of three eggs, home fries, toast, coffee and six pieces of bacon. It was a destination for workers, nightcrawlers, hipsters and drunks.

How I miss that funky era before Boston got gussied up and gentrified. That’s when the famous No Name Restaurant as a real deal, harbor fish joint and not the lousy tourist trap it is today. During my hackey days I had many a meal at the counter which let you cut the line.

While the economy of New England has suffered many setbacks it has proved to be a blessing with so much preserved vintage architecture. Salem became a ghost town when the China Trade and British blockades of the War of 1812 had a devastating impact. Nantucket and Martha’s Vinyard became time capsules when the whaling industry tanked.

Now Boston is booming with ubiquitous construction and luxury, high rise condos in the once affordable South End.

As a measure of that success the traffic is now absolutely brutal.

Now is prime time to explore historic New England. While Strawbery Banke is closed for the season it comes alive during the holidays with special events and its 17 buildings decorated in a traditional manner.  Years ago I joined the bell ringers signing Christmas carols at Louisburg Square on Beacon Hill. If you’re lucky you might get invited in for eggnog. I vividly recall that taste of Olde Boston as ripped from the pages of The Late George Apley.