Pip contributed this piece herself to make sure all the facts were correct. .  .  .

Our neighbors the Kirbys at 1758 Beacon, former Christian missionaries introduced me to the arts and culture of Japan when I was about eight years old. The textiles, the carved figures of samurais in shadow boxes were portals to another world. They introduced our family to Japanese sukiyaki cooked at the table. Elsie Kirby sent to Japan for a child’s silk kimono and obi with threads of silver and gold. The garments had a spicy, salty smell that lasted for as long as I wore them. My curiosity was so alive with the desire to experience Japan; a dream that would be realized years later.

The summer of 1970, I graduated from U. of Wisconsin and signed up for a paid training as a service representative with the telephone company back home. A career with the phone company would guarantee a lifetime of benefits. My head was spinning. What did I know of life or a career?

During those fretful three months with Ma Bell, all I could do was plan my escape. Somehow, I managed to convince Mom that I needed to go to Japan. She took me to a convent where I had an interview with the sister superior. A Catholic school in rural Japan needed an English-speaking teacher. Ok I thought, it’s not Eastern philosophy but maybe Catholic mysticism is my path. The sister superior flunked me at the interview and with good reason.

If I was not to carry the Catholic banner into the foothills of Japan, I had to find another way to ease Mom’s fear and gain her support. That’s when Aunt Mary and Uncle George Fedorko came to the rescue. Uncle George had an assignment through his company, Air Products, to work in Tokyo. They invited me to live with them. Perfect plan. Mom set me up with her travel agent, Mr. Bemis to book a round the world open ticket and arrange for ship passage from San Francisco to Yokohama. I had a couple of weeks to visit with fiends in Madison, drive cross-country and visit friends in Berkeley.

It was only a few months since graduation and already I was an outsider in Madison. A crazy stranger stole my passport and winter shoes. Days later, on my way out of Madison, the FBI knocked on Mom’s door wanting to know what leftist organization I was affiliated with and my connection to the girl under investigation. How I managed to dodge that bullet remains a mystery.

Being with old friends in the autumn in Berkeley was perfect. Life was beautiful. Yellow gingko leaves paved the streets. Perhaps this was where I was meant to be. But I held a time-stamped ticket out of there. There was no possibility of staying.

Mixing up the terms debark and embark, I arrived at the port in San Francisco as the ship was heading out to open water. The port crew was going to ferry me out but told me to head to Long Beach where the ship would dock next day. I got a hotel room where I watched the harbor from the window. Sure enough, the boat docked but fearing that I could screw up my last chance, I couldn’t sleep a wink. 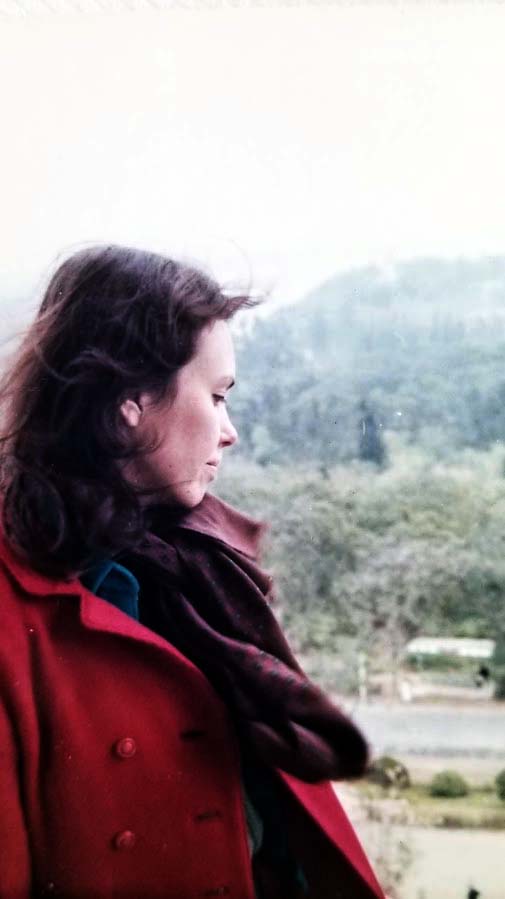 Teacher from Beaver Clare and Alan Rosenfield with Jill and Paul 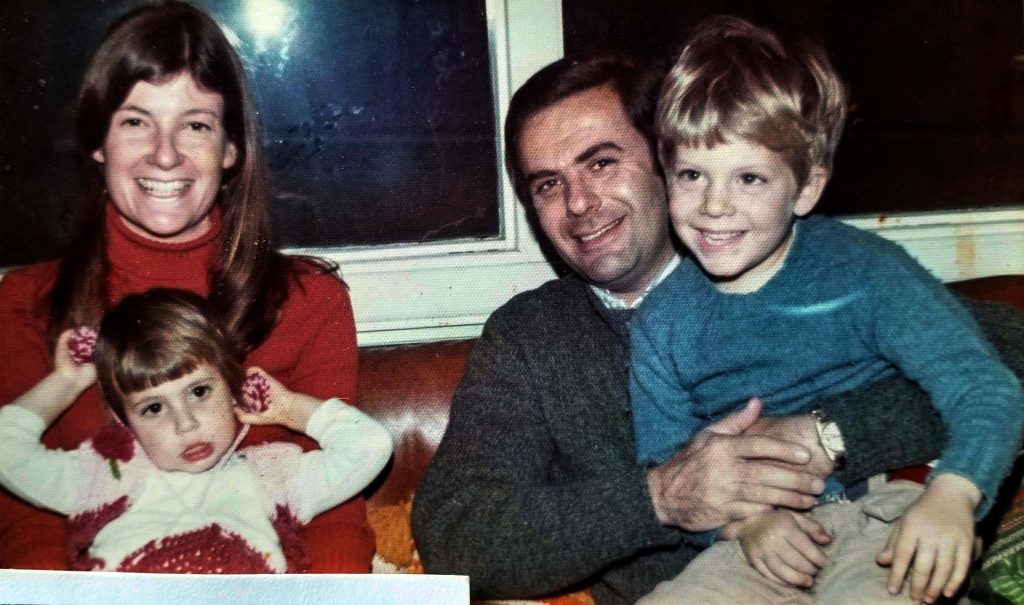 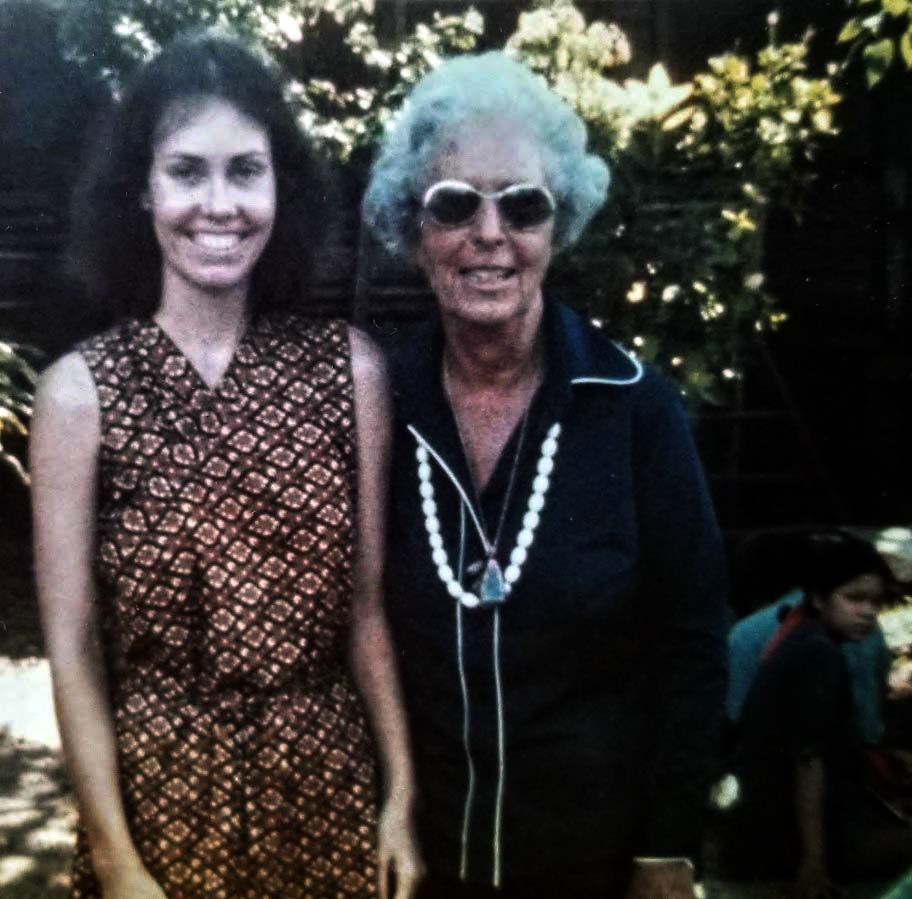 He took her home to meet the family

The Pacific crossing was lovely with a stopover in Honolulu. I spent the day on Waikiki Beach with my new friend Tomiko. Suddenly, the boat docked in Yokohama and all my acquaintances dispersed. Now what? Kamakura and the renowned Buddha was not far away. At the temple, I saw the handsome ship’s doctor with two lovely Japanese women on either arm. He barely acknowledged me with a head-nod. Fortunately, I had enough sense to shun his advances when he pursued me aboard the ship. His nod was acknowledged with a cool nod in return.

My Japanese immersion at the inn in Kamakura was bullish and clumsy. I climbed into the bath covered in soap leaving a telltale ring of my ignorance. That was followed by seizing the shoji screen and thrusting my hand through the rice pane. My boorish marks were left everywhere. Two nights in a local Ryokan and I was drained of all my money. Feeling defeated it was on to Tokyo and a clean, cheap hostel where the next moves were planned. First, I needed shoes and Tomiko took me to an open-air market. Size 9 was almost nonexistent but we found something more or less adequate. The winter coat that I left in a hotel closet in Colorado would be replaced later.

Little by little, I settled in. By a stroke of luck, I rented an unheated house in the Tokyo suburbs. I made some money tutoring children and teaching conversational English to businessmen. Ramen noodles, mandarin oranges, scallions and peanut butter was the affordable diet.

I began in earnest to search for a Buddhist teacher. Finally, when I found the one temple complex that would take women, I was informed that the Abbott was away for an extended period. In the meantime, my three month tourist visa was about to expire and there were complications in obtaining a work visa. Work visa applications had to be submitted from outside of the country. After finally settling, travel was the last thing on my mind.

The best option was a fourteen-day trip on a freighter to Hong Kong with stops in Korea and Taiwan. I would await my visa in Hong Kong then head back to Japan.

There were four woman passengers and a Chinese/Taiwanese crew bound for Hong Kong. A Radcliff graduate, well into her eighties, shamefully and repeatedly killed me at scrabble. She eventually tired of me. The other older woman was in the throes of a full-blown mental breakdown. She had to be wrestled to the ground and locked in her cabin to prevent her from streaking naked through the ship, screaming at the top of her lungs. This was quite unnerving and I began to wonder if this ill-fated cruise was to be the end of me. The third eccentric American talked weird new age stuff. She took me to her favorite fortuneteller in Hong Kong where it was revealed I would marry a foreigner.

The chef on board was not used to preparing vegetarian meals. In the early 70s, only nuns and toothless women were vegetarians. One evening he served me the pièce de résistance; a 100-year egg. Once the straw was peeled off, the glistening blue-black egg was ready to devour. The chef waited intently for my admiration. The smell of ammonia initiated the first and only bite. I had all I could do to suppress the gag reflex. Feigning seasickness, I bolted from the table, my body covered in hives. No insult intended – none taken.

I fell in love with Leung Yu-Ti, an officer on the Oriental Jade. We traveled together in Taiwan. He took me home to his Chinese parents, in Taipei. His sisters were thrilled, his father quite angry. We parted when his shipped sailed.

After several weeks in Hong Kong, I learned that the visa documents were lost. At the invitation of my friend and former high school French teacher Clare Rosenfield, I continued on to Thailand expecting it to be a quick interlude before returning to Japan. I only returned to Japan many years later, married to a foreigner.  Ironically, my Aunt Mary and Uncle George never made it to Japan as planned.